The series creator talks about the CIA and more 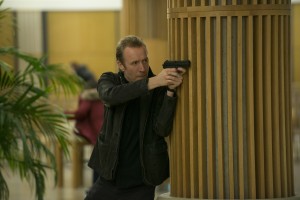 Olen Steinhauer is a successful novelist (the Milo Weaver series, YALTA BOULEVARD QUINTET) who decided to write a television series. BERLIN STATION is the result. The Epix series, now in its first season Sunday nights and renewed for a second, takes place at the title C.I.A. location. Richard Armitage, Rhys Ifans, Michelle Forbes, Leland Orser and Richard Jenkins star as some of the operatives circling one another while someone is leaking information.

ASSIGNMENT X: Did you start BERLIN STATION as a novel and then decide to make it a TV series instead?

OLEN STEINHAUER: No. Actually, I started it as a TV series, and then, seeing as that’s a ridiculous idea to think you can produce a TV series, I thought, “Okay, if nobody wants it, then I’ll write a novel based on it,” but luckily, I didn’t have to.

AX: Is this a co-production between Epix and a German company?

STEINHAUER: Studio Babelsburg in Berlin is involved. And they’ve been around for over a hundred years. They have that fabulous book. They did METROPOLIS. So they go way back.

AX: What kind of research did you get to do?

STEINHAUER: We got the State Department to allow us to get a tour of the [American] embassy [in Berlin], we got a special tour of the embassy, so that we could figure out the design aesthetic. Marco Bittner Rosser, our [production designer], used that to create this whole station, which you saw, and it’s modeled after a lot of the design inside of the embassy. But we also got special permission, which a certain other show didn’t get, to shoot outside the embassy, which you had to go straight up to the State Department for that.

AX: When you were casting this, were you looking at people who seemed like real CIA people? Richard Jenkins, Rhys Ifans and Richard Armitage have all played intelligence community people before …

STEINHAUER: No, actually. In a way, although we make sort of a midseason shift into more thriller territory, it’s really more of an espionage drama. So we were just trying to find topnotch actors who could pull off the roles. It’s the basic conceit of the show that these are just normal people. So to go out of our way to find people who had played espionage characters before would have been a step too far, I think.

AX: You have a ten-episode first season. Was it hard to write it so that it was open-ended enough to allow for a second season?

STEINHAUER: Well, in the ending, there is closure. You have the satisfaction of closure, and to me, to continue on, you’ve just got to make sure everybody’s alive [laughs], by and large.

AX: And what would you most like people to know about BERLIN STATION?

STEINHAUER: [long pause, laughs] It’s like my novels. It uses spy craft, but that’s not its interest. Its interest is in, what does a difficult job do to people? And it’s about the human factor in international relations. There’s a basic question of, at what point does the human cost of foreign policy just undermine it completely? And you can do that on the large scale, thinking of drones blowing up weddings or cities, or on the smaller level, where you have characters who are harmed by American foreign policy, but just individually, in small ways. And that in a way is what’s most interesting.

This interview was conducted during Epix’s portion of the 2016 summer Television Critics Association press tour at the Beverly Hilton Hotel.