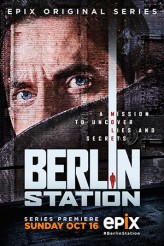 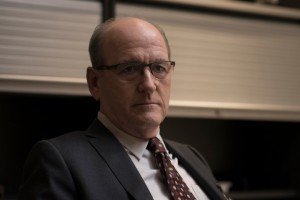 Richard Jenkins has a long, impressive resume that include an Emmy win for his lead actor turn in OLIVE KITTRIDGE and an Oscar nomination for his supporting work in THE VISITOR. A smattering of the Illinois-born actor’s other film credits include SILVERADO, HANNAH AND HER SISTERS, WOLF, STEP BROTHERS, LET ME IN and CABIN IN THE WOODS. Jenkins is currently working for director Guillermo Del Toro in THE SHAPE OF WATER.

However, until now, Jenkins has only been a regular in one series, HBO’s SIX FEET UNDER. Epix’s BERLIN STATION, which premieres Sunday, October 16, has brought Jenkins back to television.

ASSIGNMENT X: This is only your second series. Do you prefer doing feature films, is it just that there aren’t the roles that you’re looking for in series, or is it just that an American TV series schedule is not something you want to deal with?

RICHARD JENKINS: There’s no rhyme or reason to anything I do [laughs]. I gravitate to what is interesting and what I read and think “I’d like to do this.” So that’s kind of my world. Whoever wants to use me, I let them use me. But I don’t have any grand plans. I just go where the work is.

AX: What appealed to you about BERLIN STATION?

AX: Your character Steven Frost seems like he’s operating at a level of exhaustion …?

JENKINS: Yeah, I’m tired. He’s been doing it a long time, but something happens a little bit later that changes all that. This whole Thomas Shaw thing is exhausting for anybody half his age.

AX: Is it tough to play that level of fatigue without becoming fatigued for real?

JENKINS: No, it’s somebody my age, so I understand it, and I understand the feeling. It’s not physical fatigue, it’s mental and emotional fatigue. [As the character], everywhere you turn, you can’t seem to get a handle on this. And if you’ve been doing it, it’s one thing when you’re young. When you’ve been doing it as long as this guy has been doing it, I think it’s almost twice as frustration, because you can’t see – any of the things you’ve learned don’t seem to help.

AX: Do you see any similarities between Steven Frost and Sitterson, your character in CABIN IN THE WOODS, since they’re both in charge of large and dangerous organizations? I’m assuming nothing quite so bizarre happens in BERLIN STATION.

JENKINS: In CABIN IN THE WOODS, nothing ever happened. Everything always went as planned, until that day. For these two guys, who were joking and having fun and talking about their weekend, and what they were going to do, they really didn’t have any issues. The world ran smoothly, for all intents and purposes. And then, all of a sudden, the s**t hit the fan, as they say [laughs]. And so yeah, it’s totally different. This guy – I think the people who are in this world deal with putting out fires all the time. So it must be exhausting.

AX: Did you do any kind of research for the role, as far as reading any ex-CIA officer’s memoirs or anything like that?

JENKINS: No, it’s just from the page, from the script. You try to bring what you have to offer to it.

AX: Did you actually shoot in Berlin?

JENKINS: Oh, yes. Five months. They were there for almost six, but I had a play to direct. And so they had to get me out by April.

AX: What was your play?

AX: The musical – are you a musical performer yourself?

JENKINS: No, I’m a director, in the theatre. Not a lot. I work with my wife, Sharon Jenkins, who’s a choreographer. So we do musicals together. We like to rethink them, find another way to do them, try to do them in a way they’ve never been done before.

AX: Is there anything different about working in Berlin than working in the U.S.?

JENKINS: Well, it’s Berlin, and it’s just a great city, a great culture. There’s so much going on. It took a couple of months to get situated, organized. A lot of it reminds me of big cities everywhere, and yet there’s something distinctive about Berlin. I see why they shot there. Everywhere you turn, there’s something interesting going on.

AX: Because of course the real-life CIA is still very active in Berlin, did you ever look around and go, “Now, I wonder if that guy is …?”

JENKINS: Yeah, you do. Because that’s part of the thing. And I think that’s one of the reasons they chose to do it in Berlin, is that it’s a history of spies and it’s the epicenter of intrigue and cool stuff. But you do learn in this who to trust.

AX: Do you particularly like the espionage genre, or is this just where the good part was?

This interview was conducted during Epix’s portion of the summer 2016 Television Critics Association press tour at the Beverly Hilton Hotel.