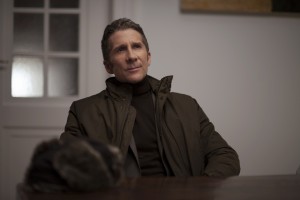 In Epix’s Sunday-night espionage drama BERLIN STATION,  which has just been picked up for a second season, Leland Orser plays Robert Kirsch. Kirsch is the C.I.A.’s Deputy Chief of Station, working sometimes at odds under station chief Steven Frost, played by Richard Jenkins.

Orser, originally from San Francisco, is a prolific performer who appears in a wide variety of films and television, including the two most recent seasons of RAY DONOVAN, along with SE7EN, SAVING PRIVATE RYAN, INDEPENDENCE DAY, ER, 24 and all three TAKEN movies.

AX: Is that a liability?

ORSER: No. He’s a perfectionist, he’s devoted to his job, he’s the ultimate patriot, a global patriot. I met a gentleman who works for the CIA. I said, “Tell me about what you do,” and he said, “We do what we do so that you and all other law-abiding citizens of the world can do what they do freely.”

AX: So Kirsch believes in what he is doing for the greater good?

ORSER: A hundred percent. And then able to adjust the moral compass. There is a compass that most of us would never be able to understand or relate to. [People like Kirsch] run towards and lean into top bad things that happen in the world.

AX: What did you learn that was helpful in playing Kirsch?

ORSER: I learned that these men and women who work for the CIA are some of the most important people in the world. I learned that, at this time, almost more than ever, we need our intelligence community, and we need man-to-man, human-to-human intelligence gathering.

AX: How did you become involved with BERLIN STATION?

ORSER: I read the script, and then I met with [the producers], and I spoke with [BERLIN STATION creator] Olen Steinhauer on the phone. He was already in Berlin. He’s a wonderful novelist, and I thought, “How interesting to have a spy novelist write a piece for television.” And it was his very first [script] he ever wrote. And I loved it.

AX: How is working in Berlin? Is it any different from working in the U.S.?

ORSER: A hundred percent different, and extraordinary. A show that’s produced in the United States and shooting in Berlin really shows you how small the world has become. We’re working with cast and crew from all over the world. And really that’s kind of where we are in the world, in politics, in life now. We’re all in this together, and I think we’re learning that in our elections right now, and the intelligence community is crucial.

AX: Had you worked in Germany before?

ORSER: I’d never even set foot in Germany before. And that was, to me at the time, the one huge drawback involved. I did not run to this show to work in Berlin, because I have a young boy and a wife [actress Jeanne Tripplehorn] who live here, and the idea of living and working far away from them was overwhelming, to say the least, and was one of the greatest challenges for me doing the job.

AX: Your family couldn’t join you in Berlin?

ORSER: They did, they came at Christmas. They were going to come at Easter, but his debate team made it into the nationals. So he had to stay and compete, which was really exciting.

AX: Do you feel that BERLIN STATION has a true ensemble cast?

ORSER: Of course I do, and we really became an ensemble, because we were like on a deserted island together, the deserted island being Berlin. Nnd none of our family or friends or pets were there, so we turned to each other. And we had weekly meals together and checked in with each other and looked after each other and helped each other to adjust to life in a foreign country.

AX: And what would you most like people to know about BERLIN STATION?

ORSER: You know, we were talking about, is it a thriller, or is it a drama? And we decided it’s a hybrid, and so we called it a “driller” [laughs]. There’s a little something for everybody. If you think of it as a workplace drama, if it were a hospital, we’re the doctors and the nurses. Our patients are the citizens of the world, and our job is to protect them.

This interview was conducted during Epix’s portion of the summer 2016 Television Critics Association press tour at the Beverly Hilton Hotel.