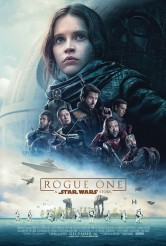 The dark side is with this standalone 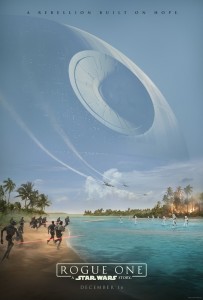 ROGUE ONE: A STAR WARS STORY is the first live-action feature film in the STAR WARS universe not directly tied to the Skywalker family. ROGUE ONE is certainly part of the STAR WARS timeline, and indeed some familiar characters pop up here (several for longer than others). It has the look, the general sound and a lot of the plot arcs we associate specifically with STAR WARS.

Nevertheless, ROGUE ONE is its own movie in several specific ways. Without getting too spoilery, one of these departures from the rest of the STAR WARS features means that parents of small children should scope out the territory first and make sure that the kids are ready for the darkness herein. There’s no sex, but between the tone and a few of the plot points, some youngsters won’t be up for this.

ROGUE ONE – everybody knows this part by now, right? – takes place just before STAR WARS: EPISODE IV – A NEW HOPE (aka what we normally think of as the first STAR WARS). It concerns obtaining the blueprints, which (spoiler alert) Luke Skywalker will use in STAR WARS to destroy the Death Star. We meet several different factions of the Rebel Alliance, and the Empire is well-represented.

There is action of all kinds, from some impressive actor-led stunts (Donnie Yen aficionados won’t be disappointed) to shoot-outs, to the spaceship conflicts that give the series its name. We expect CGI aliens, but one otherwise impressively rendered character has an “uncanny valley” eye problem.

The protagonists in ROGUE ONE are more hardened (understandably, given what they’ve been through) than those in the other movies. This is a mission-oriented war film, with moral ambiguities on all sides. Characters who are compromised in some way are the norm here, rather than the essentially good/essentially evil types STAR WARS more frequently provides.

Without getting too spoilery, acting standouts here include Alan Tudyk, the aforementioned Yen and Wen Jiang. Ben Mendelsohn scores as the primary villain, and Mads Mikkelsen and Riz Ahmed are both touching as tortured souls.

There seems to be a split in viewer reaction to ROGUE ONE that breaks down like this:

For those who grew up loving STAR WARS, but have wanted the film series to grow up and become more nuanced and dangerous along with them, ROGUE ONE does this, while still squarely existing within the design and narrative parameters of the universe. It also offers lots of Easter eggs of various sizes.

Those who grew up loving STAR WARS and associate the franchise with a particular ethos of light and dark and a balance of humor and drama may be less enthused about the tilt toward the latter.

Those who don’t have a strong emotional investment in STAR WARS (yes, they exist) but simply come in wanting to take ROGUE ONE on its own terms will find a solid science-fiction war movie. In terms of moral complexity, it’s not quite EYE IN THE SKY, but it still makes you think, and, on occasion, laugh, cheer and tear up.