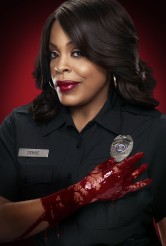 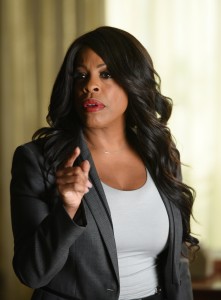 Niecy Nash is a busy woman. Nominated two years in a row for Supporting Actress for her work in Showtime’s MOVING ON for her performance as Didi Ortley, a nurse at a geriatric care ward, Nash worked with Showtime again this year for a five-episode arc on MASTERS OF SEX. Nash is back for her second season as law enforcement maven Denise Hemphill on Fox Network’s Tuesday-night SCREAM QUEENS, created by Ian Brennan, Brad Falchuk and Ryan Murphy. Nash also just wrapped five seasons as Lolli Ballentine, wife of Cedric the Entertainer’s singing minister Boyce, on THE SOUL MAN. When we catch up with her at a party thrown by Fox for the Television Critics Association at West Hollywood’s SoHo House, Nash talks all this and more.

ASSIGNMENT X: Were you excited/gratified by this year’s Emmy nomination for GETTING ON?

NIECY NASH: I was very gratified, because it confirmed for me that the first time wasn’t a fluke.

AX: Do the nominations do anything? That is, do they help your career, or are they mainly just, “This is a good thing, to be acknowledged”?

NASH: I think it’s both.

ASSIGNMENT X: So Denise managed to survive on SCREAM QUEENS?

AX: How are you enjoying working on SCREAM QUEENS?  The style is very heightened …

NASH: You know what? I like it. The girls on it are amazing and so much fun. So I have a great time there.

AX: Last year, the action was at a college, where Denise was a security guard. This year, a lot of SCREAM QUEENS takes place at a mental hospital …

NASH: My character went from being a security guard to an FBI agent. So I’ve graduated a few steps.

AX: Did Denise always want to be an FBI agent?

NASH: She was a security guard at the end of the first season, but she was on her way to Quantico at the end. Now she has graduated and is an FBI special agent.

AX: Is she at the hospital investigating all the carnage that happened in Season 1?

NASH: Of course! We’re trying to get it all figured out. 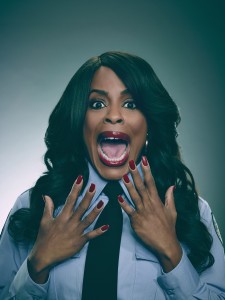 AX: Who did you play on MASTERS OF SEX?

NASH: I play a character called Louise Bell. She runs an Alcoholics Anonymous group, and she has a very interesting relationship with Dr. Masters on the show [in] ’68. My new show [will be] on TNT, called CLAW.

AX: How are you scheduling all of these different shows?

NASH: I don’t know. Some of them overlap, so sometimes you’re at two different shows in the same week, which is crazy.

AX: Do you have to take some downtime to transition from one to the other, or …?

NASH: Downtime is a luxury that I sometimes don’t have.

AX: So how do you get yourself from the mindset of one show to the other, or are you one of those people who can just go, “Action,” bang, you’re the character?

AX: SCREAM QUEENS and MASTERS OF SEX I think are both shot in Los Angeles …

NASH: Yes. This year [the first season was shot in New Orleans]. And CLAW [shoots] in Louisiana.

AX: Can you say who or what you play on CLAW?

NASH: I play a woman named Desnelle, who owns a nail salon, but it’s really a front for drug money. I launder drug money, and I decide to take over the business, because I need money to take care of my mentally disabled brother, who’s being played by the actor Harold Vernieu. So it’s all about how I become a queen-pin.

AX: Is there anything that you’ve been able to draw on for one of the characters that you apply to the others?

NASH: I try to let them stand alone and be their own individual women.

NASH: Well, I’m happily married in real life, so it’s always wonderful to be a part of that conversation in entertainment. However, playing a bad girl is going to be real fun.

AX: Your character in CLAW is a bad girl?

AX: And what would you most like people to know about SCREAM QUEENS coming up?

NASH: Expect the unexpected. Ryan is a genius, Brad is a genius, and it’s going to be a good time. Fans of the show won’t be disappointed.