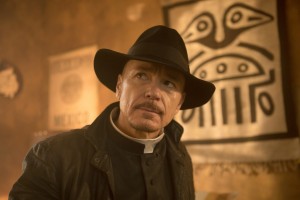 Ben Daniels plays Marcus Keane, one of the title characters in Fox Network’s THE EXORCIST, which has its first-season finale Friday, December 16. When we last saw Marcus in the previous episode, he was in dire straits, and he’s already been through some terrible things. Sent to live at a monastery as a child, Marcus survived a torturous failed exorcism, only to try to help Chicago’s Rance family, and be excommunicated for his efforts. Marcus has teamed up with the less experienced Father Tomas (Alfonso Herrera), but the forces arrayed against them are more powerful than they imagined.

Daniels, a native of Warwickshire, England, has won multiple accolades for his stage work in the U.K. and on Broadway. In the U.S., he’s known for his television roles as Adam Galloway in Netflix’s HOUSE OF CARDS and ruthless choreographer Paul Grayson in Starz’s FLESH AND BONE. Daniels can currently be seen in movie theatres all over the planet (and who knows, perhaps even in galaxies far, far away) as General Merrick in ROGUE ONE: A STAR WARS STORY. Of course, demonic possession would be the least of Daniels’ worries if he breathed a word about ROGUE ONE prior to its release, so this interview focuses on THE EXORCIST.

ASSIGNMENT X: Father Marcus has a very grueling exorcism sequence in the first episode, where it looks like you’re playing opposite a very young actor as the victim of possession. Did you have to help him, or did he help you, or …?

BEN DANIELS: He was amazing, Isaac [Linares], he was just absolutely fantastic. Even putting in a contact lens is a difficult thing, but he just took it completely on board. And when you’re working with someone like that on those intense scenes, he just went for it. A couple of times, it was a body double, but the majority of the time, it was him. And they were pretty intense. The whole research was pretty intense.

AX: What were you researching?

DANIELS: Demonic possession. It’s kind of terrifying. A couple of nights, I slept with the lights on. It was always kind of a fantasy for me, from horror movies. I read an awful lot, I listened to interviews, I watched documentaries, and I spoke to a priest. So I was pretty full of it by the time we started shooting the first episode. And then the more I researched, and the more rational people I heard speaking about it, it’s slightly unnerving. But I still don’t know where I stand on it.

AX: Was there anything the research that made you scared you of things that hadn’t scared you before?

DANIELS: Yeah. I think as an actor, you look for the truth in your characters, no matter who you’re playing. And there are hundreds of exorcists, thousands, throughout the world. So those men believe in what they do. And the more I read and the more I listened and the more I chatted to people, this is an area that seems to exist in the world. And if you open yourself to that, it’s quite unnerving.

AX: Do you use the same accent on THE EXORCIST that you have in real life?

DANIELS: Yeah. I’m from the Midlands, right in the middle of England. So I’m using my own accent.

AX: Once you did the pilot for THE EXORCIST, were you gratified, surprised, relieved, or kind of worried when it went to series?

DANIELS: Completely thrilled. I couldn’t wait for it to go to series. And all of us felt the same. We had such a great time making the pilot that we’re over the moon.

AX: You were arguably playing an almost-demonic character in FLESH AND BLOOD …

AX: So how is this similar to and different from FLESH AND BONE?

DANIELS: Well, FLESH AND BONE, I suppose there was something spiritual in the transcendence of those dancers, but that’s where the similarities end, really. This is pure fighting spiritual evil.

AX: Well, your choreographer character was sort of –

AX: Like Marcus, he was driven and felt very right in his cause …

AX: Is there any difference between working for an American TV network and working for premium cable or Netflix?

DANIELS: Well, obviously, the main difference is sort of profanity and nudity. You have to be much more clever, I think, on a network show, to push barriers, to see where you can take things. So that’s the main difference, I think.

AX: You’re shooting on location in Chicago. How are you enjoying the city?

DANIELS: I love that town. It’s incredible. And it reminds me of when I first went to New York, when I was twenty-five or something. It has a wildness, Chicago. It’s that huge wealth butted right up against huge poverty. And out of that flourishes, I think, incredible creativity. The theatre and the music there are absolutely phenomenal – as are the restaurants.

AX: How are you enjoying working with Geena Davis and Alan Ruck, who play Angela and Henry Rance?

DANIELS: I love them. Both of them icons in different ways, but it’s extraordinary, working with them.

This interview was conducted during a Fox Network party for the Television Critics Association.