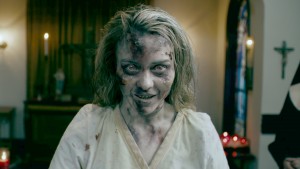 Hannah Kasulka plays the possessed Casey Rance on Fox Network’s THE EXORCIST. The young actress from Georgia has also played a fairy on TRUE BLOOD, appeared in the revenge thriller PRANK and stars as a young witch in the short film CLARA. (Among her other credits is an arc on THE FOSTERS.)

So it’s a bit surprising to learn that Kasulka is actually scared of horror movies and TV. At the time of this interview, she hadn’t even seen the original 1973 EXORCIST feature film.

HANNAH KASULKA: Having heard about the movie and what we’re doing, it’s very different. But if you’re a fan of the original, I’ve heard people that are fans that like our show.

ASSIGNMENT X: How old is Casey?

KASULKA: She’s a freshman in college. She’s still living at home – she’s a little immature for her age, I think. She’s kind of a wallflower, her sister was the star of the family, she went to Juilliard and then had this horrible accident, so [Casey is] not used to the attention being on her. She kind of hangs in the background.

AX: At the beginning, it seems like Casey’s sister Kat, played by Brianne Howey, is the one who is possessed, because she sits in her room all the time. Is Casey as annoyed as she seems to be with her sister for not coming out of the room?

KASULKA: Yeah. I think Casey was excited to have Kat back home, because they’re really close, and Kat’s kind of being a bummer, and Casey wants her to just snap out of it so they can have fun.

AX: Casey and Kat’s dad Henry, played by Alan Ruck, is suffering from mental problems an injury. Before Casey is overwhelmed by supernatural problems, how does she deal with that?

KASULKA: I think that’s been the hardest thing for her, her dad, watching him deteriorate, and her mom [played by Geena Davis] is taking all this pressure on and is sort of in denial about it. I think Casey feels a little confused. She wants to be optimistic because of her faith, but it’s difficult, because he’s obviously not in great shape.

AX: When you talk about Casey’s faith, does she start out as a believer?

KASULKA: I’m not quite sure. I think it’s every teenager – anybody that’s raised in a faith, as you become older, you start to question. You’re like, ‘Wait. We go to church every Sunday, but do I believe this?’ I think she’s struggling with that now.

AX: Does playing a possessed character mean that you have to deal with prosthetics or unusual physicality?

KASULKA: Oh, yeah. There’s a lot of makeup involved, and contacts, and a stunt team that’s going to be helping, working with us. And I have a dance background, so I think that helped, honestly, when I was doing the rigs and stuff, just the physicality of it.

AX: Do you have to rehearse with the stunt team and they show you how to work with the rig?

KASULKA: Mm-hmm. So there’s a team and they set things up, and there’s a double, in case there’s something that I can’t do, or the network is like, “No, we don’t want her to do that.”

AX: Are you having fun being on location in Chicago?

KASULKA: Oh, yes. We had a blast. We went to blues bars and lots of great food and pizza, and I’m really excited to shoot in Chicago.

AX: Is there anything that you’ve researched to get into Casey’s character?

KASULKA: Well, I think growing up Catholic and [non-Catholic] Christian [as Kasulka did] is sort of similar, so I have that background with how I was raised, which is nice, it’s similar in a lot of ways, but I’ve done some Googling of exorcisms and possessions, which is not fun [laughs], even during the daytime, so I’m a little leery to do [more research], because you can get some interesting results.

AX: And what would you most like people to know about the TV version of THE EXORCIST?

KASULKA: Oh, man. Our cast is so great – Ben [Daniels] and Alfonso [Herrera] and Geena and Alan and Brianne – everyone’s amazing. I think if you’re a fan of the genre, and you’re a fan of horror and psychological thrillers, you’re going to like it.