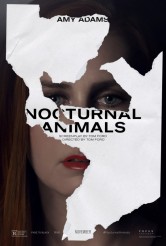 The narrative in NOCTURNAL ANIMALS runs on multiple tracks. On one, unhappy artist Susan Morrow (Amy Adams) reads an unpublished novel by her ex-husband Edward (Jake Gyllenhaal). On another, the story in Edward’s book, also called NOCTURNAL ANIMALS, unfolds. On the third track, we see how Susan and Edward’s marriage first comes together, then falls apart.

In the film NOCTURNAL ANIMALS, the thriller aspect (Edward’s novel) is by far the most compelling of the three plotlines. The film is based on the late Austin Wright’s novel TONY AND SUSAN, in which Edward’s creation seems primarily there as a counterpoint to Susan’s actual experiences. Unfortunately, though director/screenwriter Tom Ford has visual style to burn (he’s a clothing designer when he’s not making movies), and he did a first-rate job with his earlier movie A SINGLE MAN, he doesn’t seem to know how to make Susan’s tale engrossing in itself.

The tale within the tale is plenty brutal, its tale something like a more artful version of LAST HOUSE ON THE LEFT (humiliation, assault, off-camera rape, murder, revenge) set in the flats of West Texas. It has moments where we wonder if it’s going to turn into a variation on THE TEXAS CHAINSAW MASSACRE. It doesn’t get quite that insane, but when Tony (also played by Gyllenhaal) and his family are run off the road by a trio of evildoers, it’s still scary and enraging. We sympathize with Tony. Then blunt-spoken sheriff’s department investigator Ray Andes (Michael Shannon) enters the picture, bringing with him a healthy dose of dark humor. It’s twisty and compelling, with Aaron Taylor-Johnson as a bad guy so infuriating that we become very invested in whether he’ll receive a comeuppance …

And this all keeps getting interrupted by the other two plot threads. Part of the problem is that Susan spends a lot of time reading the book. Viewers will have their own reactions to the dramatized sequences, but when we cut back to Susan’s overwhelmed responses, we’re in meta territory. Susan is so overcome by what’s on the pages that our immediate instinct is to ask whether we feel the same. For those who don’t, this veers close to self-parody.

We’re apparently meant to understand that Susan feels alarmed by the book, but since Edward is a pretty gentle soul, we need more than we are given to make that leap. Then there’s the fact that the more we learn about Susan’s life, the less dimensional she seems. Adams fills Susan out emotionally, but there are so many clichés in the character’s construction that it’s hard to muster much feeling for her. She’s Daisy Buchanan – privileged young woman, leaves true love for financial security, then has an empty life. That could work if Susan were presented strictly as Edward’s ideal, but as our p.o.v., there needs to be more to her. We can’t mourn her lost potential if we never see it in the first place.

The early romance of Susan and Edward is agreeable, and their growing issues with one another are plausible enough.

Gyllenhaal does a fine job as the anguished Tony and the sweet Edward. Shannon and Taylor-Johnson are both outstanding. Shannon is very funny as one of the toughest men in the West and Taylor-Johnson makes a creep who would test the convictions of Gandhi.

Both the good thing and the bad thing about NOCTURNAL ANIMALS is that its fiction-within-fiction stands on its own. Fans of violent Westerns and non-supernatural horror will be engrossed. However, when NOCTURNAL ANIMALS tries to use one thread to comment on the others, the parallels don’t work. Edward may have experienced the breakup as an apocalypse, but we’re seeing things through Susan’s eyes. We don’t believe she identifies with Tony, and we’re never convinced she has cause to see him as a threat, existential or otherwise.