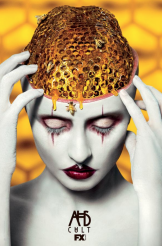 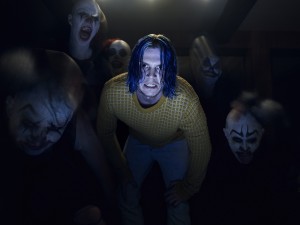 AMERICAN HORROR STORY, Tuesdays on FX, is now in its seventh season. The series, created by Ryan Murphy & Brad Falchuk, has an anthology format, with each new season telling a different story, and a repertory cast of actors who come back in different roles, year after year. AMERICAN HORROR STORY has dealt with a haunted house, an alien-and-Nazi-plagued mental institution, rival witches’ covens, a small-time circus freak show, a hotel owned by a vampire and inhabited by the spirit of its serial killer builder and a menacing small town.

This season, AMERICAN HORROR STORY: CULT, deals with a married pair of restaurant owners (played by Sarah Paulson, who has been in all seven seasons, and Alison Pill, who is new to the series) who are targeted by a homicidal cult.

Over its seven seasons, AMERICAN HORROR STORY has racked up a considerable number of Emmy wins. Four of those were won by makeup department head/makeup designer Eryn Krueger Mekash and her team. Mekash also won two more Emmys for other Ryan Murphy projects: the first season of FX’s FEUD and the HBO telefilm THE NORMAL HEART.

ASSIGNMENT X: How long have you been with AMERICAN HORROR STORY?

AX: Do you do any other projects on the AMERICAN HORROR STORY hiatus, or do you just try to get some rest?

MEKASH: I do all kinds of stuff. I pretty much never stop. I’ve worked with Ryan Murphy for fourteen years, I’ve done all of his projects. So that includes pilots, films, TV shows, GLEE, NIP/TUCK …

AX: Are you on the upcoming AMERICAN CRIME STORY: THE ASSASSINATION OF GIANNI VERSACE as well?

MEKASH: I was, yeah. I designed VERSACE, and then I designed FEUD, I was on FEUD the whole time. So I do everything he [Murphy] does, and I design it for him, and then I establish crews and move on.

AX: With some of the other projects you move on, but you’re on AMERICAN HORROR STORY sort of full-time while it’s rolling? 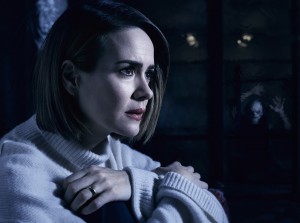 AX: On Season 6 of AMERICAN HORROR STORY, ROANOKE, there were multiple levels of reality. Did you do different designs for each level?

And then when everybody came together, that was supposed to be the “real” look. So yeah, there were a ton of designs that we had to redo, and it was midseason, and we didn’t know anything about [that plot twist]. It was like, “And the next episode, everybody’s completely redesigned.” And it was like, “Whoa!” We thought it was scary the first time. Then we were like, “Oh, it has to be actually scarier, or cooler,” so it was a big scramble to get it done, but we did, as we always do.

MEKASH: One of the most challenging makeups we’ve done on AMERICAN HORROR STORY from a realistic stand point was the Sarah Paulson age makeup that we did on ASYLUM [Season 2], where she had to be very beautiful and a very successful woman. She had to be seventy-five, I think, and still retain how beautiful that [her character] Lana was as well. It couldn’t just be an age makeup. It had to be [what Paulson describes as “a plastic surgery age makeup, tight and older”]. I think we were successful with that. it was just so challenging for [Paulson]. She was in I think it was two eighteen-hour days, and then we recreated it the last day as well. That was, I think, one of our most challenging ones, just because there was a lot of pressure to have it look incredible, and I think we did that.

As far as other things, sometimes we have days where we’re doing five or six full neck slashes, where we’re killing a ton of people, where intestines are coming out or something. We have a lot of challenges, but I would say my favorite challenge was making Sarah look so beautiful as an older woman.

AX: So an age makeup is potentially more complex than some of the murder makeups or the creature makeups?

AX: When you have actors who have been on the show before, but are coming on as new characters this season, like Sarah Paulson and Evan Peters, do you have face casts or facial measurements for them?

AX: Does that make it easier?

MEKASH: Especially at this point, all of our prosthetics are designed by Dave Anderson at AFX, and he’s been doing the show since [Season 4] FREAK SHOW. We have this library of cast members with their head casts, so we can pull information and make prosthetics a little bit quicker that way. Yeah, we have people on file now.

AX: Do you have any cast members with allergy concerns where you have to do their makeup differently?

MEKASH: We do. We have people who have sensitivities and we take precautions, just like with anything.

AX: When it’s just standard cosmetic camera makeup that might be on any show, is that your department as well?

AX: When you’re designing a beauty makeup that’s going to become a murder makeup, do you take into consideration every stage of that, like what beauty makeup is going to look best with a slashed neck?

MEKASH: Mostly, we go as problems and gags and scripts present themselves, so most of the time, we might have to make an adjustment at some point, depending on what it is, but we do that on the fly. We’re very good at improvisation.

AX: Without being spoilery, can you say about how many effects makeups you’re doing per episode on AMERICAN HORROR STORY: CULT?

MEKASH: Oh, I can’t even count. Every season, we have just tons of stuff. So every episode has between five and ten things in it.

AX: And how big is your makeup department crew?

MEKASH: Right now, I have Kim Ayers as my key makeup artist, and Mike Mekash, my husband, is my key prosthetics department head. He works with me once in awhile, he’s been on AMERICAN HORROR STORY since the beginning. So Mike Mekash is key prosthetics department head, Kim is key makeup department head. Then I also have Autumn Butler, Sylvie Knight, and then I have Carleigh Herbert – there’s usually four to five people working a day, and then sometimes we have many more people, like fifteen people, usually.

AX: Do you have a favorite effects or not necessarily creature, but other than conventional-looking person makeup?

MEKASH: In FREAK SHOW, I really loved the makeups we do that are beauty and horror at the same time, so Mat Fraser, who played our Seal Boy, had a beautiful tattooed body that we did. Angela Bassett always plays the most unusual characters. She had three breasts in that season, and it was so much fun to do her makeup for that. Sarah Paulson runs the gamut of all kinds of different looks. It’s such a big cast, and there are so many challenges, that I don’t know if I have a favorite, but I loved the Pepper [the microcephalic circus performer played by Naomi Grossman] makeup very much, we did that quite a bit, I love de-aging and aging people, so there are so many challenges. It’s a makeup artist’s dream come true show.

AX: And what would you most like people to know about AMERICAN HORROR STORY Season 7 that you’re allowed to say?