Game of Thrones Review Battle of the Bastards Season 6

TV Review: GAME OF THRONES – Season 6 – “Battle of the Bastards”

A simply great hour of television 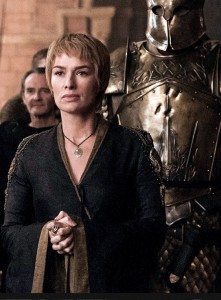 Details? Sure. Daenerys Targaryen (Emilia Clarke) is understandably angry that the Masters of the surrounding cities have broken the pact Tyrion (Peter Dinklage) engineered. Daenerys’ plan is to destroy the masters’ fleet – currently attacking her city of Meereen – and then to burn their cities to the ground. Tyrion reminds her that her father, the Mad King, wanted to burn cities full of civilians, too, which is why Tyrion’s brother Jaime had to kill him. Daenerys takes Tyrion’s advice seriously.

This is why, when three representatives of the Masters come to demand Daenerys’ surrender, she unleashes all three dragons and mounts Drogon, but only burns one ship. Grey Worm kills two of the Masters, and Daenerys’ Dothraki hordes happily take on the way-outnumbered Sons of the Harpy. Tyrion counsels the one quaking remaining Master to go home and tell his people about this day should they ever consider attacking again.

Here’s the thing about Daenerys and those dragons – no matter how many times she and they come out on top, it never gets old. Dany’s enemies are so smug and dismissive (and rapacious and homicidal) that the suitable response to them really does seem to be a gigantic fire-breathing dragon, or even just Dany and her combination of fireproof essence and brief but pointed observations.

There’s also a delicious scene when Yara (Gemma Whelan) and Theon Greyjoy (Alfie Allen) come for an audience with Daenerys and Tyrion. Yara pledges her allegiance and fleet to Daenerys in exchange for Daenerys’ support in securing the Iron Throne. Since Yara and Theon’s uncle Euron currently holds the Iron Islands, Daenerys asks why she shouldn’t ally herself with him instead. Yara explains that Euron will insist on marrying Daenerys. Daenerys says she assumes that Yara’s offer doesn’t come with a similar demand. Yara says, “It’s not a demand, but I’m up for anything, really.” Daenerys says that the Ironborn will have to stop raiding and raping. Although this is the Ironborn way, Yara agrees to it. It is observed that everyone in the room had horrible fathers who made the world worse; this group has the power to make it better. We can but hope they succeed. It’s also amusing to think that, for those who will want to see Daenerys and Yara paired off based on this scene (not likely to happen in the show itself, but fanfic writers will knock themselves out), it’s a ship involving literal ships.

We are so thoroughly immersed in all of this that it comes as something of a psychic, visceral shock to find that we’re even more enmeshed in the battle for the North, as the forces of Jon Snow (Kit Harington) and Ramsay Bolton (Iwan Rheon) finally face one another on the snow-covered field.

First, there is a small exchange of words, where Jon asks Ramsay to fight him in single combat. Ramsay of course refuses, and taunts Jon with the reminder that Ramsay still holds young Rickon Stark (Art Parkinson) hostage.

There is a war council, where Jon, Davos (Liam Cunningham) and Tormund (Kristofer Hivju) try to figure out how to outflank Ramsay’s greater forces. When the council is done, Sansa (Sophie Turner) is irate that Jon didn’t consult her. While she doesn’t know war strategy, she does know that Ramsay will do something cruel and unexpected, and that Jon should be ready for it. Sansa also says that if they lose, she will not return to Ramsay alive.

During the night, Davos goes for a walk and comes across the burnt toy stag he carved for Princess Shireen. We know, though Davos doesn’t yet, that the young girl was burned to death as a sacrifice on the orders of her father, who was advised to do so by Melisandre (Carice Van Houten). Davos is beginning to have suspicions, though.

Jon orders Melisandre not to resurrect him a second time if he dies during the battle, but Melisandre says she has to try. The Red God wanted Jon back, so she’s bound to make the attempt. When Jon asks what kind of god would create the situation they’re in, Melisandre responds, “The one we’ve got.” We may not like Melisandre, but sometimes she makes a good point.

When the battle begins, Ramsay brings Rickon with him, unties the boy and tells him to run to Jon. While Rickon is running, Ramsay begins shooting at him. Jon, heedless of Sansa’s advice, charges on his horse to save Rickon, but Ramsay shoots the boy dead just as Jon reaches him. Jon, furious, charges. His horse is shot out from under him, and Jon stands alone before the Bolton forces …

… But then Jon’s cavalry thunders up to surround him from behind and as grueling, bloody, intense and ferocious a battle sequence as has been committed to film erupts. Feature films by major directors aim for but do not achieve this kind of gut-churning, head-spinning effect. There are moments when all seems lost, and we the audience wonder what will happen – we did get the Red Wedding, after all …

… And then the forces of the Vale ride into the fray, courtesy of Petyr Baelish (Aiden Gillen). Baelish is one of those very ambiguous GAME OF THRONES characters. He’s got Ned Stark’s blood on his hands, but he also saved Sansa (and everybody else) by engineering Joffrey Baratheon’s death, and now he’s here in person, with a very pleased Sansa at his side. We finally exhale. How this was staged and rehearsed and filmed and edited is worthy of a documentary and even shot by shot analysis. It’s as horrifying and confounding and bruising as any mass conflict dramatized for the camera.

Ramsay and what’s left of his men limp back to Winterfell. Jon’s army is mostly gone, though one of Ramsay’s men points out the Bolton army is gone as well. Ramsay says they can withstand a siege within the keep’s walls. Ramsay of course doesn’t reckon with the fact that Jon’s Wildling contingent includes the giant Wun Wun (Ian Whyte), who bashes in the gate. Wun Wun is full of arrows, but there is time for Jon to give him a grateful look before Ramsay at last shoots the giant through the eye. Ramsay then tries to shoot Jon, who catches the first three arrows in a wooden shield, then uses the shield to knock Ramsay to the ground.

Jon then proceeds to beat Ramsay half to death.

However, the final satisfaction is given to Sansa, who visits the badly battered Ramsay in his dungeon cell. He’s tied to a chair. Ramsay’s dogs are let into the cell. Ramsay at first insists that his dogs are loyal, but Sansa points out that Ramsay himself has said he’s starved them for a week. Sure enough, the dogs savage their former master. Sansa stays and watches for awhile, then turns and leaves, smiling.

Ramsay Bolton is one of those characters who is designed to let even real-world pacifists get their blood lust up. We can’t blame Sansa for smiling. We can maybe wonder if she and Jon are letting Ramsay off too easy even with this manner of death, but they’re not hardcore sadists, and, as has been noted, those poor dogs were desperately hungry.

This is the end of a three-season-long major chapter in GAME OF THRONES. Kudos to Iwan Rheon for playing a more than worthy villain to the hateful, wily hilt, and bravo to the writers for making him so memorable. Most of all, though, all hail the GAME gang for truly awesome work.