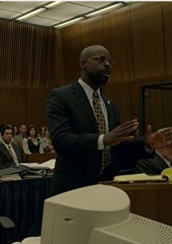 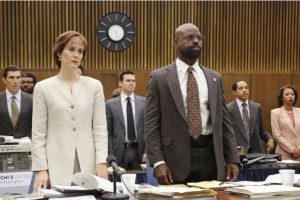 In FX Network’s THE PEOPLE V. O.J. SIMPSON: AMERICAN CRIME STORY, which concludes Tuesday, April 5, Sterling K. Brown plays prosecution team member Christopher Darden. The Missouri-born Brown, who appeared earlier this year in the film WHISKEY TANGO FOXTROT and was a regular on ARMY WIVES, is known for his arcs on SUPERNATURAL as Gordon Walker and on PERSON OF INTEREST as Cal Beecher.

While discussing playing the increasingly frustrated and disillusioned Darden, Brown is joined by Anthony Hemingway, who directed five episodes of THE PEOPLE V. O.J. SIMPSON.

AX: What was your impression of the trial at the time it was happening?

STERLING K. BROWN: It was very interesting, because I can remember thinking that I didn’t know if O.J. was innocent or guilty, but I was ebullient at the verdict, because I finally felt that the criminal justice system was working for someone who looked like me, rather than against him. And so twenty years later, it’s very interesting to have a very different perspective, because what should have been the foremost thing in my mind, and in the consciousness of America, was the brutal taking away of life of two people. [Instead], it became an indictment of the Los Angeles Police Department.

It was right after the Rodney King beatings, and the black population of Los Angeles was ripe to hit back at that police department. And it’s so easy to see. My experience as a young black man, being pulled over while just being in the wrong neighborhood, questioned without cause or anything like that, it’s very easy to see how black America and white America had a very different experience of this case. So that was my experience twenty years ago.

[The case] shows you the intersection and cross-section – there’s race, and then there’s socioeconomics. So money goes a long way in this country. And today, the lack of indictments in Ferguson and Staten Island and in Baltimore and in Cleveland and in North Charleston, where young black men are having their lives taken away from them, and all of these cases being videotaped, and still justice has not been able to transpire for these individuals. It illuminates to me just how important finance is in the criminal justice system.

AX: In the midst of the trial at the time, did Christopher Darden make much impression on you?

BROWN: I remember thinking he was on the wrong side of history. I remember having these thoughts of, ‘Why is he trying to bring down an image and icon of our own community, a representative of someone who had made it out?’ And what I didn’t realize was that he was just trying to do his job to the best of his ability, and the evidence led him to believe that O.J. Simpson was guilty of a double murder. Walking through this process, and seeing how maligned he was by the African-American community, the excommunication that he underwent, it was unfair. I mean, to be called an Uncle Tom, to be called a sellout, that’s about as bad as it gets when you are proud of your community, when you wish to be an example of someone who has done well by your community. He was working in the Special Investigations Division of the Prosecutor’s Office, so that he could prosecute corrupt cops. So I hope that this show illuminates his journey, and in a way that African-Americans can see him as someone to be proud of.

AX: Is Christopher Darden still with us?

BROWN: He most definitely is. He’s in private practice in Culver City.

AX: Did you talk with him?

BROWN: I reached out, but he respectfully declined any conversation beyond my hello. Which I understand.

AX: What did you learn in your research that helped you form a characterization?

BROWN: I learned a lot. When reading [Darden’s book about the case] IN CONTEMPT, I learned that he was a father, that he had to leave his daughter behind in Richmond, California, so that he could come to the D.A.’s office here, and that he went back and forth to the Bay Area, so that he could be a part of his daughter’s life. He was a caring and conscientious member of the black community, and I have the utmost of respect for him.

[We are joined by Anthony Hemingway.]

AX: How did the two of you work together?

BROWN: I’ve got to say, this man brought so much preparation. He was there before everybody, he was there after everybody. I would come in thinking I was going to be the first person on set – this brother would already have his breakfast together, with his headphones on, combing through his script for any little detail to look through, to live through, play down. He’s wonderful. It was a joy. We were so blessed to have him direct the majority of our episodes.

ANTHONY HEMINGWAY: And the feeling’s mutual. As a director, you dream of, with any material that you do, to have the talent that [can make it work]. I’ll say that I had a dream team. And he was one of the MVP stars of the team. And it was really also, to come and work every day, and know that whatever direction you wanted to entertain or play with, it’s just beautiful to have talent that you can shape and mold in any direction, and they knock it out of the park every way it goes.

AX: With the recent discussion of how football-related concussions can have serious and even fatal effects on player health and behavior, do you think any of O.J. Simpson’s actions could have resulted from undiagnosed brain damage?

BROWN: It’s definitely a possibility. You see players who have long NFL careers and then shocking things happen to them. I remember when Junior Seau committed suicide after having a Hall of Fame career as a linebacker in the NFL. I mean, it’s something that definitely plays a part. I don’t know if it’s the totality of his decisions, because we still have to take responsibility for our actions, but I’m sure it plays a part.

AX: Were you directing this at the same time you were directing episodes of WGN’s UNDERGROUND?

HEMINGWAY: No, I basically came right out of UNDERGROUND into this. I actually started this a couple weeks late, because I was finishing UNDERGROUND.

AX: Were there ever times in the courtroom scenes here where you thought, “Can’t there be some more action? Can’t they run across a yard or something?”

HEMINGWAY: [laughs] Well, you know, it’s funny. One of the very things that I remember in my very first meeting with [writers/executive producers] Scott [Alexander] and Larry [Karaszewski was] asking them, “How much life is this going to have?”, hoping that it wasn’t going to become sedentary and just be stuck in the courtroom, because there’s only so much you can do [with camera movement and action] that makes sense. But there were times that I even challenged myself – it’s indicative of life. You’re rarely standing still. So you try to find behavior or movement that you can inject into moments that is real and authentic and just gives life to the frame that you’re watching. So there definitely were times – there would be so many meetings in offices or courtrooms or conference rooms, and I’d sit there and I’d create brain damage trying to figure out how to get it on its feet.

AX: Christopher Darden worked closely with lead prosecutor Marcia Clark, who is played by Sarah Paulson, who was also working on AMERICAN HORROR STORY for producers Ryan Murphy and Brad Falchuk at about the same time you were all shooting PEOPLE V. O.J. SIMPSON. How was working with her?

HEMINGWAY: The funny thing I’m going to share with that – the reference of Cuba [Gooding Jr., who plays Simpson] and [episode director] John Singleton’s history together [on the film BOYZ N THE HOOD], Sarah and I have that. My first job in the Director’s Guild as an a.d., as an assistant director, was her very first job as an actor, on a TV series called AMERICAN GOTHIC.  So we’ve known each other for over twenty years. And it’s beautiful for me – I would tell her many times that I get emotional – I’m doing it now – when you come into this and you care and you love someone and you just respect what they do, you watch them and you’re just blown away. As for her, having known her for such a long time, to see so much growth – even at the place where she started, she was amazing, and to see her continue to evolve.

BROWN: I’ll give you a sports analogy. People often talk about [Michael] Jordan being the greatest player. And the people who were close to him say, it wasn’t just his talent. He was the hardest worker on the team, because he didn’t want anybody to think that it was just a God-given thing. He busted his ass. Sarah Paulson busts her ass. She comes in more prepared than anybody. And her level of scrutiny that I saw her go through, she cared about her hair, her makeup, the script, her wardrobe, and if something wasn’t right, she had no problem speaking up until she felt comfortable with it, and then we could move forward. I learned so much from her through this process, I’m eternally grateful.

AX: Do either or both of you have a favorite scene in this series?

HEMINGWAY: I have many, but one of them involves this man here. It’s Episode Nine [“Manna from Heaven”].

BROWN: I think in Episode Six – Episode Six shot over a long period of time. I think it took about two-and-a-half months, because we would do it in chunks, but the first day of shooting of Episode Six was a scene between Marcia and I where we were kind of dancing together. That was particularly memorable and playful and it was good.

AX: And what would you both most like people to know about PEOPLE V. O.J. SIMPSON?

BROWN: What I would most hope for is that, empathy begins with understanding life from another person’s perspective. I hope that mainstream America can understand the ebullience that African-Americans had with regard to this verdict. I hope black people can see, when they’re presented with the evidence, why other people were skeptical of that verdict, and that a conversation can begin so that we can all see things three-hundred-and-sixty degrees.

HEMINGWAY: I think also, in addition to that, THE PEOPLE V. O.J. SIMPSON is really a narrative of life, a slice of life, and we just really wanted to play in the dichotomy of those extremes. And I think that [executive producer/director] Ryan Murphy used the cachet and power that he has to get behind this and to really elevate it to where it is, because I’m not sure there are many, especially in the medium of TV, that would have really supported this, or have been able to pull off or achieve the level that we were able to.