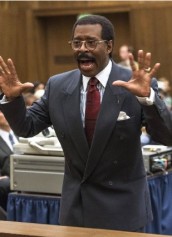 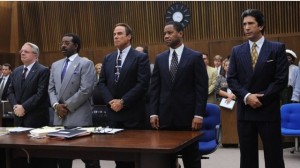 FX Network’s THE PEOPLE V. O.J. SIMPSON: AMERICAN CRIME STORY concludes its ten-episode run this Tuesday, April 5, at 10 PM, with all episodes available on FX on Demand. The first season of the planned anthology series deals with the famous Nineties trial that was a nexus of attitudes about race, gender, social class, the LAPD and the media (to name a few issues raised). Based on Jeffrey Toobin’s book THE RUN OF HIS LIFE, THE PEOPLE V. O.J. SIMPSON was developed for television by the writing/executive producing team of Scott Alexander and Larry Karaszewski (THE PEOPLE VS. LARRY FLYNT, ED WOOD, BIG EYES).

Alexander talks with ASSIGNMENT X about Simpson’s capacity for self-deception.

AX: How is it working with this producing team?

SCOTT ALEXANDER: It started with [fellow executive producers] Brad [Simpson – no relation to O.J.] and Nina [Jacobson]. They were very creative, we had a lot of salons where the four of us would sit around for literally four or five hours, just talking about the big-picture idea, before we ever knew what the show would be, and we would just talk about, wow, the whole idea of the socio-economic disparity between the lawyers, which was like a weird, heady issue that hadn’t really been covered in the O.J. trial, so we would just babble about this for a few days and take notes. That process went on for months. They were great collaborators. Nina and Brad were the first people we’d show the scripts to. They were sort of our wall against the world, in terms of giving us the first feedback and in terms of talking about tone.

AX: Whether or not he was guilty of murdering two people, O.J. Simpson’s behavior was certainly erratic. Do you think that had anything to do with possibly having brain damage from getting hit in the head so many times during his career as a football player?

ALEXANDER: Oh, wow. That theory has never crossed my mind. We never thought of it. I mean, certainly, it felt like, if he did do it, there was a self-hypnosis delusion that kicked in. Once he had the Dream Team, particularly once he had [defense lawyer] Johnnie [Cochran] rallying him, he no longer believed he ever could have done it. It was inconceivable to him at that point.

AX: So he was very good at believing what he was directed to believe, regardless of the facts?

ALEXANDER: Yeah. By the time we’re into Episodes Four, Five, Six, and he’s just saying emphatically, “There’s no way I could have done it,” I think he believes that.

AX: What would you most like people to know about PEOPLE V. O.J. SIMPSON?

ALEXANDER: It’s not a straight-up procedural. It’s a big, thick stew of drama and social commentary and comedy and tackles a zillion issues. Hopefully, it’s like reading a really great six-hundred-page novel.