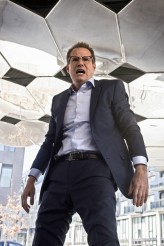 The actor talks his return to Noah Bennet, aka HRG, plus CASTLE 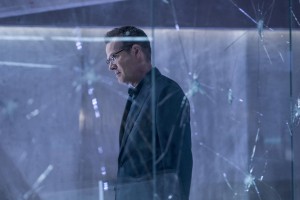 For four seasons, Jack Coleman played Noah Bennet, aka HRG (short for “Horn-Rimmed Glasses”) or “the man with the plan,” on NBC’s HEROES. Noah, adoptive father of the indestructible cheerleader Claire (played by Hayden Panettiere, now a regular on NASHVILLE), was an operative of a shadowy agency that co-opted people with superpowers. However, fatherly loyalty won out with Noah – usually. It was always hard to be sure of his motives, which was one of the things that made him such a memorable character.

Pennsylvania native Coleman was a standout member of the large HEROES cast. His earlier career included work on Broadway (he was Danny in GREASE) and series regular roles in DYNASTY, NIGHTMARE CAFÉ and KINGDOM HOSPITAL. When HEROES ended its run in 2010, Coleman went on to arcs on VAMPIRE DIARIES, THE OFFICE, BURN NOTICE, SCANDAL and CASTLE.

Now HEROES and its creator, executive producer Tim Kring, are back on NBC, Thursday nights at 8 PM, with the sequel series HEROES REBORN. Coleman is returning with it as the only full-time regular on board from the first series, though Masi Oka (as Hiro Nakamura), Greg Grunberg (as Matt Parkman), Sendhil Ramamurthy (as Mohinder Suresh), Jimmy Jean-Louis (as the Haitian) and Cristine Rose (as Angela Petrelli) all make appearances. Zachary Levi also stars as a man who has a very dark reaction to those with abilities.

AX: Were you surprised when HEROES was resurrected, or did you always think it was going to happen?

JACK COLEMAN: I was surprised. I think in the first year, a lot of us thought that there might be some sort of a wrap-up, but then three, four years down the road, nobody was really expecting anything, and then all of a sudden, we saw that ad [for HEROES REBORN] on the Winter Olympics, and we all started texting each other and a little bit later, I got a call from Tim and I was thrilled to hear it.

AX: Can you tease where Noah is when we first see him again in HEROES REBORN?

COLEMAN: Noah is living a life off the grid, a quiet, normal life, but I don’t think that’s really in the cards for our friend Noah.

COLEMAN: Claire figures very prominently. That’s all I can say. Claire is an ever-looming presence in HRG’s life and in the life of HEROES.

AX: Does Noah finally get superpowers?

COLEMAN: I would say it’s probably not likely, and I kind of like it better without it.

COLEMAN: No, I would say he has some of the answers and all of the questions. Although many of the questions early on are very much trying to piece things together that he can’t quite make sense of yet.

AX: Does Noah have strong feelings about Zachary Levi’s character?

COLEMAN: We don’t meet for awhile, but then once we do, it’s very dramatic. It’s a cool thing what happens with our characters late in the episodes.

AX: Did you already know Zachary Levi in real life from his Nerd HQ?

COLEMAN: I didn’t know him from Nerd HQ. I knew he had Nerd HQ, but I knew him from NBC things, and we have mutual friends, and we’ve hung out socially.

AX: Is he now dragging you into Nerd HQ?

COLEMAN: Well, he dragged us all [the HEROES REBORN cast] into Nerd HQ at Comic-Con, and it was pretty impressive, I’ve got to say.

AX: How is it getting back together with the members of the team who are returning?

COLEMAN: It’s amazing. It’s awesome to be in Toronto, and all of a sudden, there’s Sendhil and there’s Grunny and there’s Masi and there’s Cris Rose and Jimmy Jean-Louis. To have these guys back on board is fantastic.

AX: Are you having a sense of déjà vu?

COLEMAN: It’s somewhere in between déjà vu and vuja de. Occasionally, it feels like I’m on the old show. Most of the time it does not, because it is not the old show. It’s very much a new thing, new cast, new stories, but from time to time, there are things that happen, especially when some of the original cast comes back that you have those moments.

AX: There have been some changes in technology since the original HEROES. Does that affect how HEROES REBORN is made?

COLEMAN: There is a lot of new technology and on a show like HEROES, you’ve got to always push those boundaries, because the audience expects it. So yeah, it’s amazing what has changed since just five, six years ago.

AX: You’re back on CASTLE for the beginning of their eighth season. How do you enjoy your work there?

COLEMAN: That you don’t need to have seen it before to get into it, but if you were a viewer before, you will be richly rewarded.

This interview was conducted at NBC/Universal’s party at Beverly Hills’ Spago restaurant for the Television Critics Association summer press tour.