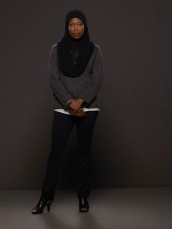 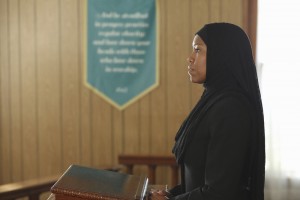 Regina King has just won an Emmy as Outstanding Supporting Actress in a Limited Series, Miniseries or Movie for her work in ABC’s AMERICAN CRIME. In the show created by John Ridley (12 YEARS A SLAVE), concerning a murder investigation tainted by racism and human fallibility, King played Aliyah Shadeed, a convert to Islam whose brother went on trial for murder in Modesto, California. King will be back on AMERICAN CRIME next season, but as an entirely different character, Terri Lacroix, in a whole new story. Ridley and ABC decided that the drama should be an anthology that uses the same cast to tell diverse stories of social issues in the United States.

King, a Los Angeles native whose career has encompassed both high-profile films (BOYZ N THE HOOD, FRIDAY, JERRY MAGUIRE) and being a regular on TV (227, SOUTHLAND) was nominated but hadn’t yet won her Emmy when this interview took place, but she could not sound more delighted about her continuing work on AMERICAN CRIME. King is also enthused her role in Season 2 of THE LEFTOVERS, which resumes Sunday, October 4 on HBO. That series concerns the aftermath of the unexplained disappearance of two percent of Earth’s human population.

AX: Can you say anything about next season of AMERICAN CRIME?

REGINA KING: I think what’s exciting about the next season is that the subject matter that we’re dealing with [in first season] are things that are real and we talk about at home, or with just our friends, but it inspired a conversation that went beyond that, so that was very exciting for me, and this year, we’re doing a bit of the same. We’re dealing with those issues that go on in different classes, as far as economical differences and how that affects you in whatever your tiny world is.

AX: Do you know what your Season 2 character will be like on AMERICAN CRIME?

KING: I’m playing someone who’s completely different. I’m playing a very prominent figure in the community in Indianapolis, a very successful woman, very successful family, who is looked up to, who people look to rub shoulders with us. It’s quite different from what I played last season.

AX: Before you got involved in AMERICAN CRIME, did you even think of doing repertory on television, where you’re coming back the following year to the same people in a different configuration? It’s very common in theatre, but much less so in TV.

KING: Actually, yes. I mean, as an actor, that’s what you want to do. You become an actor so that you can play a lot of different people. I’ve always kind of thought that would be something interesting. I think what we saw done with AMERICAN HORROR STORY let us all know that it was possible, and something that the audience would understand.

AX: Was there anything in the first season of AMERICAN CRIME that surprised you or particularly moved you?

AX: Do you think it’s important that we see dramas that are about race and class and some of the other issues covered in AMERICAN CRIME?

KING: Very important, because that’s where we are. I mean, that’s what we live. Race is such a huge part of America’s fabric and it’s something that exists that is not talked about probably as much as it should be to heal a lot of pain for all races. It needs to be a discussion.

AX: Do you think people might comprehend these issues better when they’re presented dramatically rather than as, say, in the news?

AX: How is it working with series creator John Ridley?

KING: Oh, my God. It’s amazing. He sets a tone of excellence. He kind of, without being someone that is not friendly or someone that is a tyrant, he’s actually charming and inspires you to want to be better, to want to work harder.

AX: In Season 1, did you do research into any aspect of your character?

KING: Sure. To be playing a Muslim woman who’s a convert, I definitely needed to be clear about the differences between the two, and enough about the religion to know why my character would be inspired to become a Muslim.

KING: Yes. I’m actually on Season 2 of THE LEFTOVERS on HBO. I’m a doctor in the town of Jarden, Texas. This season takes place in Jarden, Texas.

AX: How are you enjoying that?

AX: In the trailers, it looks like you’re involved in some very physical action …

KING: Yes. I’m a very physical person and I always have been, so when I get the opportunity to show that side of myself, it’s a great thing.

AX: Do you enjoy more realistic or more metaphysical stories?

KING: I can’t say that I enjoy one more than the other. I just like good work, good content. I think that’s why there’s no divide between movies and TV any more, because actors just want to do good work and do work that inspires them.

This interview was conducted at ABC’s party for the Television Critics Association summer press tour at the Beverly Hilton Hotel.