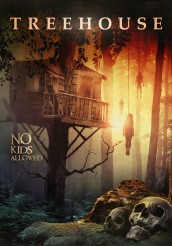 TREEHOUSE is one of those low-budget horror movies that starts off so slowly that it seems like it’s never going to pick up speed. Unfortunately, unlike some other genre entries that lull us in order to make the jolts that much more impactful, TREEHOUSE continues as it begins. It takes 25 minutes to get into the treehouse, where we wind up feeling more trapped than the characters do. Worse, it conflates sadism – we see the after-effects of torture/murder – with scares, which are just about nonexistent. There are attempts at character development that don’t add up, an absolute lack of explanation of anything to do with the villains, and an ending so astonishingly anticlimactic that it may wind up being the film’s best claim to notoriety.

We’re somewhere in the Ozarks, outside a small town. Elizabeth (Dana Melanie), left alone with her little brother Bob, thinks there may be an intruder in the house. Later, Elizabeth and Bob are both reported missing on the news. Since there have been several disappearances in the area, the local fair is called off, but this doesn’t stop some local teenagers from going into the woods at night to celebrate anyway.

Bullied Killian (J. Michael Trautmann) and his protective older brother Crawford (Daniel Fredrick) don’t find their comrades. Instead, they come upon a treehouse, where an injured Elizabeth speaks of being attacked. Crawford goes to get help, leaving Killian to watch over Elizabeth, but the danger has not passed.

TREEHOUSE is not without assets. The cinematography by J. Christopher Campbell is lovely and atmospheric, bringing to mind the films of Terence Malick or the paintings of Andrew Wyeth. The impulse to give the characters rounded back stories is commendable and it’s good to see the indie film flag flying.

However, there is so much that is wrong here that the flaws swamp the film. Some things that are evident get over-explained, while things that call out for exploration are ignored. Characters bond in ways that don’t seem likely under the circumstances, and someone who appears to be adult is pegged by others as a minor. The worst infraction among many is that TREEHOUSE simply isn’t scary. It sets up a potentially frightening situation and then squanders it every which way. This is overall worse even than the previously mentioned ending, although since there are plenty of unterrifying horror movies and only one with this finale, again, that will probably be what people recall most.

Disc extras include a director commentary and a making-of featurette.