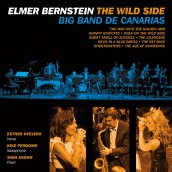 No composer embodied the pure movie swing of jazz during the art form’s mainlining into much of film scoring during the 50s and 60s like Elmer Bernstein. From the hot sax heroin rush that flooded into Frankie Machine’s veins in THE MAN WITH THE GOLDEN ARM to the lustful brass catfight of WALK ON THE WILD SIDE or the salacious gossip beat that stank of  THE SWEET SMELL OF SUCCESS, Bernstein tapped into the energetic transgressiveness of music that promised a rawness that the Hayes Code-enforced movies could only hint at. So it’s only natural that Varese head Robert Townson would use his new concentration of staging international film concerts, particularly in Spain, to essentially strip Bernstein down to his jazz roots in the outlying Canary Island of Tenerife. It’s a swinging concept that not only goes for the hep Bernstein standards in their brass and percussion purity, but also numbers from the composer’s vast repertoire that one might not begin to think of having a sax in sight for.

With its main players put together from The Big Band De Canarias, this “Wild Side” ensemble has an energy that’s both tight and free form as they nail MAN, WALK and SMELL in a way that’s as nostalgic as it is vibrant. And they’re not afraid to riff as well on performances for THE RAT RACE, give a saucily percussive build to “Jubilation” or put their Latin samba chops into THE CARETAKERS. Special attention is given to Bernstein’s TV work for the John Cassavetes detective-cum-musician show JOHNNY STACCATO, from its explosive main title to its soft, seductive vibes and crime scene blues that give off a cool, intimate film noir vibe. Frequent scoring session and Varese concert flutist Sara Andon adds to the album’s catchy energy, particularly in her tender reading of DEVIL IN A BLUE DRESS and blowing with high, crime jazz finesse for a rambunctious performance of SAINTS AND SINNERS, then pleasantly helps turn the theme from THE AGE OF INNOCENCE  into a neat variation that transports music written for an 1800s Manhattan-set drama into resplendent, uptempo music you could imagine hearing a century or so later. Vocalist Esther Ovejero is also on hand to give bad girl sex appeal to the theme from THE SILENCERS, a Bernstein-Bond title song if there ever should’ve been one.

There’s a real cigar-smoke feel to these performances, the sense that this is playing in a backstreet nightclub as some very bad deals are going down to the clink of booze-filled glasses – which is probably the best compliment to give this big band ensemble who’ve captured Bernstein’s bad musical behavior in an unplugged, swinging way that the composer surely would’ve appreciated, let alone the fans of his brassily strutting golden era.

Click on the link to Purchase the ELMER BERNSTEIN: THE WILD SIDE soundtrack