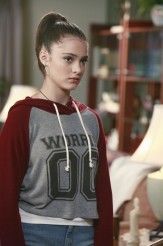 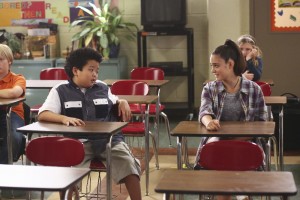 Based on the life and memoirs of celebrity chef Eddie Huang, ABC’s Tuesday-night half-hour comedy FRESH OFF THE BOAT shows Eddie as a young teenager, played by Hudson Yang, in the early 1990s, when his father Louis (Randall Park) uproots the family from Washington, D.C. to Florida in order to open a Western-themed restaurant. Mom Jessica (Constance Wu) and Eddie and his younger brothers (played by Forrest Wheeler and Ian Chen) try to adjust to the new community.

ASSIGNMENT X: Did you ever want to do anything other than perform?

LUNA BLAISE: This has been what I’ve wanted to do my whole entire life.

AX: How did you get involved with FRESH OFF THE BOAT?

BLAISE: I auditioned when I got the call and I just got cast.

BLAISE: Nicole is very sassy, she’s very out of the box and very confident.

AX: Have you met the real Eddie Huang?

AX: How realistic do you think the depiction of Eddie Huang as a teen is compared to the actual Eddie Huang?

BLAISE: It’s pretty on point. They both are very relatable to each other. Everything about them, I think, is pretty [true of] both.

AX: There’s no studio audience for FRESH OFF THE BOAT, but you’ve done theatre Do you like performing in front of a live audience?

AX: Do you have a preference for film or television or theatre?

BLAISE: Film and television. What I prefer about camera acting is that you can do it over and over again, so if you mess up, you can say, “Oh, can I do this again?” But if you’re doing it in front of a live audience, it’s like, “I don’t really know what to do, because there are hundreds and hundreds of people watching me right now, and I can’t mess up.”

AX: So you like the opportunity to perfect it?

AX: What are your favorite kinds of scenes to do, the ones where Nicole gets to talk back or the ones with big jokes or the more serious scenes?

BLAISE: I personally like the more sassy scenes, but that’s just me. I love the scenes where Eddie and I get to connect.

AX: Your father is originally from Scotland. Can you relate that at all to the characters in FRESH OFF THE BOAT?

BLAISE: I kind of see that. Because with Nicole, she’s always been in the neighborhood, but she’s never really reached out to anybody and she’s never really been friends with anyone and with my dad, I think he just came into the United States not really knowing anybody and he wanted to reach out and so I think that’s what Nicole is doing.

AX: Have we met Nicole’s parents on the show?

BLAISE: Yes, we’ve met my dad and my mom is never in the show. Ray Wise plays my dad and my stepmom is [played by] Chelsey Crisp, so I live with my stepmom and my dad in the show, that’s who you see me with. But my mom is never mentioned. I love working with them, because it’s so funny seeing how different the three of us are. I mean, of course, Ray is nothing like me, but we definitely have some really funny moments. And Chelsey and I, we’re just so different all around. Chelsey and I, we are not the same at all – I think that’s what makes the show so funny.

AX: Do you have a lot of communication with the writers? Do you ever get to go to them and say, “I think it would be funny if Nicole did …”?

BLAISE: Yeah, actually. They’re very open to suggestions and ideas, and they listen a lot. If you have something that maybe would add to the character and be something that would be really funny, you could of course tell them and they would definitely think about it. The whole entire cast has a very open relationship with the crew and the writers, especially the writers, so definitely.

BLAISE: We’re all hanging out together. It’s like one family. It’s a professional relationship and a fun relationship with the entire cast and crew. Even though our age differences are huge and they’re not the same at all, we all love being together and making jokes together.

AX: You were also in MEMORIA, which was directed and produced by James Franco. How was that experience?

BLAISE: It was so much fun. I learned so much on that set. That’s really where I learned a lot of things acting-wise, like how to carry a character throughout the entire film and always being in character and just doing everything that is necessary for the character. I learned from that movie that I really loved acting and I wanted to do it as a career.

AX: Do you have a preference between comedy and drama?

BLAISE: I don’t know. I love both of them equally.

BLAISE: Yeah, I love writing. Fiction and screenplays. I would love to write movies someday.

AX: Do you have any hobbies?

AX: When you get to drive, do you have a favorite kind of car that you’re looking forward to?

BLAISE: I’m all about the environment, and so I’d love to have an electric car, but I love having really nice cars, so when I’ll be able to drive – maybe around 2017 – they’ll have an electric Range Rover. That’d be my dream, that’d be awesome.

AX: Is there a particular kind of music that you like?

BLAISE: Not really. I love all music. [When dancing ballet], it’s ballet music. When I’m having fun, I like pop music to get me going.

AX: What would you most like people to know about FRESH OFF THE BOAT right now?

BLAISE: I think having an Asian-American show is important. I think FRESH OFF THE BOAT is revolutionary, because even though the main characters are Asian-Americans, the show is very relatable to every demographic and our audience is very diverse, and we should watch it because it’s really good.