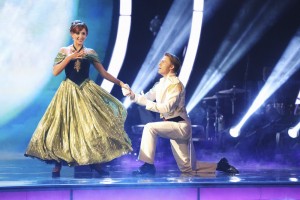 It’s Disney Night on DANCING WITH THE STARS and they spared no cost in creating an elaborate recreation of nine different Disney films via dance. The cost was high and the dips were low but all nine couples threw themselves into character for a chance to feel like a part of a bona fide classic Disney feature. Some worked extremely well, others lacked the typical Walt Disney flair. Robert Herjavec & Kym Johnson took the biggest hit while doing a spin of MARY POPPINS. They came in last with just 24 points but managed to stay in the dance game. Chris Soules & Witney Carsen and Patti LaBelle & Artem Chigvintsev earned 27 points harboring on the bottom of the leader board. With 28 points points, Noah Galloway & Sharna Burgress survived to dance again but Suzanne Somers & Tony Dovolani, who earned 28 as well, were eliminated.

Suzanne Somers (actress/entrepreneur) and her partner Tony Dovolani
She went off. Goodman said her jazz routine was easy on the eyes. Inaba said she brought her A game. Hough called it her best. Tonioli said she showed great confidence.
Scores: Inaba – 7, Goodman – 7, Tonioli – 7, Hough – 7,  Harland – 7

Chris Soules (The Bachelor) and his partner Witney Carson
Good energy. Inaba said his Quickstep was his best dance by a long shot. Goodman said he did fine. Hough told him to work on his musicality. Tonioli said to listen to the music.
Scores: Inaba –7, Goodman – 6, Tonioli – 7,  Hough –  7, Harland – 7

Noah Galloway (War Vet) and his partner Sharna Burgess
Very sweet. Inaba said she would like to see more. Goodman said he had great fluidity in his Foxtrot. Hough saw his confidence surged. Tonioli said his connection with his partner was flawless.
Scores: Inaba – 7, Goodman – 7, Tonioli – 7, Hough – 7, Harland – 7

Robert Herjavec (Shark Tank host) and his partner Kym Johnson
It  looks like he is having fun. Tonioli said he was in his own world during his Quickstep. Hough said his steps were out of time. Goodman said his performance was popping.
Scores: Inaba – 6, Goodman – 6, Tonioli – 6, Hough – 6, Harland – 7

Nastia Liukin (Olympic gymnast) and her partner Derek Hough
Adorable. Inaba said she didn’t like them lip syncing during their Jazz number. Goodman said it was like a warm hug. Hough said she liked seeing that side of her. Tonioli called it practically perfect.
Scores: Inaba – 9, Goodman – 9, Tonioli – 10, Hough – 10, Harland – 9

Rumer Willis (actress) and her partner Valentin Chmerkovskiy
Versatile! Inaba said her Samba was out of this world! Goodman said she was a fantastic dancer. Hough said it was the best dance of the night. Tonioli asked her if it felt good to be bad.
Scores: Inaba – 10, Goodman – 9, Tonioli – 10, Hough – 10, Harland – 10

Riker Lynch (actor) and his partner Allison Holker
Great, but slipped a bit in a spin. Inaba said he sleighed it. Goodman said his Paso Doble was fast and furious.  Hough called it great artistry. Tonioli said it was mad and wonderful.
Scores: Inaba – 10, Goodman – 9, Tonioli – 10, Hough – 9, Harland – 9