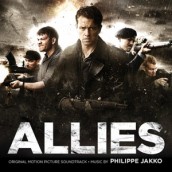 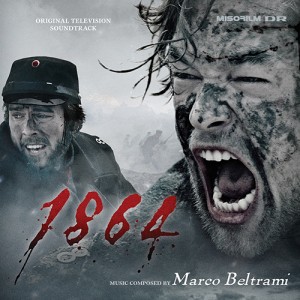 Movie Score Media’s quality releases continue to be not only a major source for discovering new composers whose attendant projects barely hit U.S. shores, but also a great way to hear relatively obscure foreign soundtracks done by sometimes eminent American musicians – in both notable cases here performed in the key of war.

Early on in Marco Beltrami’s career, the composer wrote one of his most interesting psycho-killer scores for a deranged female cellist, albeit in the guise of a period costume drama for Norwegian director Ole Bornedal’s 2002 thriller I AM DINA. Now Beltrami reteams with him for a completely different, equally impressive score for the Denmark’s most expensive TV miniseries. “1864” chronicles the country’s disastrous war with Germany during that fateful year, which also happened to see a bloody battle occurring in a United States. In fact, when stateside listeners hear the elegiacally orchestra, patriotic brass along with the tender strings and piano melody of the women left on the home front, they might assume that Beltrami has written a very assured Civil War score – minus the southern-isms. But that perhaps that’s just the point of how a powerful orchestral score can conjure the universal language of for all of its heroic folly, as dynamically performed here by Danish orchestras. They conjures both the horror, and true valor of battle, with an extra dose of tragedy given the catastrophically lopsided, and history-change results inflicted on Denmark. Beltrami does an especially good job of musically cutting between royalty planning out strategy and civilian soldiers suffering for it on the battlefront, seguing from heartfelt drama to the ominous winds of war. It’s epically sweeping music that gives 1864 all the thematic impact of a major film score, yet with such distinctive Beltrami touches as glass-like eeriness, relentlessly dire rhythms and raging brass that will appeal to admirers of such exceptional genre scores of his as SNOWPIERCER. Sure this might be Denmark. But given this oft-passionate, heroism-delineating, trumpet-blowing score in this midst of total loss, one might easily imagine Beltrami scoring a woman determined never to go hungry again if the need arises.

Rising French composer Philippe Jakko does his part for his country’s underground in this stalwart English WW2 film, wherein DOWNTON ABBEY‘s Julian Ovendon leaders a crack team of Americans and Brits into occupied territory, of course with a traitor in their midst. But while traditionally told on the cinematic front, Jakko’s score is way more contemporary in its symphonic / sample treatment than going for a Ron Goodwin-esque approach, although his music’s stalwart spirit is certainly there in terms of its heroic military timpani and low, Nazi menace. Instead, Jakko uses tense, time-is-running-out percussion and waves of threatening string tension, a la THE THIN RED LINE, albeit with an approach that’s more centered on fighting than that movie’s existential meditation on war. “Allies’” battle music is suitably throttling, while horror-like electronics convey the overwhelming forces pitted against our patriots. For the most part, ALLIES is about survival as opposed to rah-rah assaults, a trigger finger-tightening darkness that distinguishes Jakko’s work, especially in the building chorus, strings and rock-like percussion that drives a truly memorable, neo-romantic theme to its sacrificial finish. As he succeeds in giving war scoring a powerful, contemporary energy by making very good use of obviously limited musical resources, Jakko puts himself in very good stead to accept further soundtrack missions with bigger budgetary guns on this side of the Atlantic.

Click on the link to Purchase the ALLIES soundtrack