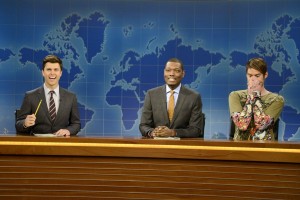 Here’s one way to reinvigorate a struggling show – bring in the heavy hitters. With the third episode of SATURDAY NIGHT LIVE – Season 40, the show brings back former MVP cast member Bill Hader to host and the results are stellar (especially with Kristen Wiig showing up to assist as well).

Part of the problem with the current cast of newbies, is that no one has fully gelled. There are strong players, but the writing is terribly uneven and often times doesn’t know what to do with the eclectic cast. This was a major problem last year, and this year is slightly better, but it’s still a major work in progress.

Bill Hader’s presence though ensured nothing could go wrong with the episode. As with his tenure as cast member, Hader could make even the weakest sketch soar. He’s an incredibly versatile performer and he proved that once again as host. It felt as if he never left.

Things got off to a rough start with a cold opening about the mysterious absence of Kim Jong-un (Bobby Moynihan) in a sketch that goes nowhere despite Moynihan making the best of the situation.

The Opening Monologue featured Hader singing, what he claims is the first time on the show. That’s when Wiig shows up to help as well as Harvey Fierstein (don’t ask). Not bad, not great, but again Hader saves the day.

The movie parody this week was THE GROUP HOPPER, which spoofed every single YA novel adaptation from the last few years. Funny in terms of how spot on it captures the silliness of YA material, but not a ton of laughs. One high point is the presence of Pete Davidson. I know he’s been given praise for this debut during the Season Premiere and it was warranted, but as a movie star, the camera loves him. So he may be covered both ways.

Most of this episode featured a reprise of Hader’s greatest hits. Reporter Herb Welch showed up, and was as funny as ever. Stefon made a glorious return and was spot on as always. There was definitely something missing without having Seth Meyers there to bounce off of, but we discover at the end of the sketch that, yes, Stefon is pregnant!

Probably the coolest reprise was bringing back “Puppet Class” which had Hader returning to his grizzled Vietnam vet character who talks about his war trauma through an equally grizzled puppet. It doesn’t reach the absurd heights it did when Seth MacFarlane hosted, but it is one of Hader’s more brilliant creations.

The rest of the episode included a Cat in the Hat sketch (with Hader at the Cat) that missed its mark, a so-so spoof of Hollywood Game Night which provided an excuse for the entire cast to do impressions of other celebrities (Kate McKinnon was spot on doing Jane Lynch) and an amusing pre-taped bit about donating “39 cents to stop hunger” in foreign countries.

The only other epic fail of the evening (aside from the Cold Opening) was a taped bit called “Inside SoCal” – a public access show featuring Beck Bennett and Kyle Mooney. It was dry and weird, but not funny.

It was also nice that SATURDAY NIGHT LIVE paid tribute to Jan Hooks and showed a classic Tom Schiller film from Hooks’ tenure where she played opposite Phil Hartman. It was a sweet musical/dance bit that still packs a punch. It was an emotional moment when it originally aired, and it had even more weight with Hooks’ passing.

Every once in awhile, Hulu will showcase a sketch cut for time, and this week it was a doozy. Called “The Gossipy Coalminer”, Hader was a weird, strange coal miner who spread rumors. It’s this kind of brilliant strangeness the show needs more of, but again, you need someone like Hader to pull it off.

As for Weekend Update, things are gelling more. Michael Che is getting more time to riff on the news, as opposed to telling jokes and it’s a step in the right direction. Whenever he did that, Update came to life. It also seems to be opening up Jost even more. He’s finally looking comfortable behind the news desk.

Hozier was the musical guest and proved to be a great find – an incredible performance and a potential new musical superstar in the making.

There was no way the Bill Hader episode was going to fail unless the writers completely dropped the ball, which they thankfully didn’t. It was a great episode and a promise that the show can find its way. The only downside is that the show still doesn’t have a powerhouse as Hader on their team. The show certainly can rely on the hosts to elevate things (Jim Carrey is returning in two weeks), but at a certain point they need to figure out what to do with the people they have to maximize the talent both in the writer’s room and on screen.