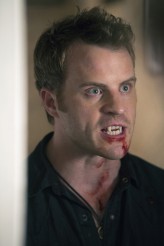 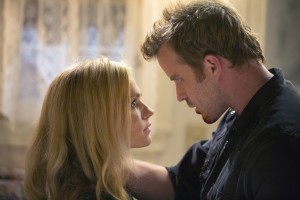 Okay, we’re going to start in the middle here, because the biggest question of TRUE BLOOD’s Season 6 finale, “Radioactive,” is not about the new world order posed at the end or what’s going to happen in what looks like a Sookie (Anna Paquin)/Alcide (Joe Manganiello)/Bill (Stephen Moyer) triangle. No, it’s whether we’ve seen the last of Eric Northman (Alexander Skarsgard), who catches fire while sunbathing naked on a snow-covered Swedish mountaintop – he didn’t realize that the fairy blood would eventually wear off. With absolutely no further information, here are what seem to be the two possibilities. One: the people at TRUE BLOOD have managed to keep news of a major cast member leaving the show absolutely secret, and moreover, disposed of the character in a completely jokey manner. Two: Eric didn’t die and Skarsgard will be back. Believe whichever one sounds most plausible. It is kind of a distraction right splat in the middle of the episode.

This aside, Season 6 resolves with Warlow (Rob Kazinsky) showing his true unpleasant colors when Sookie asks if they can get to know each other better before committing. Warlow’s response is to punch Sookie to the ground and tie her up.

Bill, back to normal – i.e., de-Lilithed – is saddened by many of the things he’s done, among them betraying Sookie. Jessica (Deborah Ann Woll) points out that the Bill of old would have walked through fire to save Sookie. Since a fairy is required to open the portal to the other plane where Sookie is, Bill, Jason (Ryan Kwanten) and Jason’s vampire girlfriend Violet (Karolina Wydra) appeal to Andy Bellefleur (Chris Bauer) to let his only surviving daughter Adilyn (Bailey Noble) assist them. Andy says no, but Adilyn – who met Sookie at Terry’s funeral – wants to help her fellow fairy. When the portal is open, Bill takes on Warlow and Sookie is rescued before Warlow completely vamps her. Violet – who is so into Jason that she considers Sookie her sister – gives Sookie her blood to heal her.

Warlow gets back into the Sookie’s house, but good old fairy great-grandfather Niall (Rutger Hauer) is able to partially come through the fairy dimension far enough to grab Warlow, enabling Jason to stake the fairy/vamp. Sookie and Jason pull Niall all the way into this dimension and Warlow disintegrates into a puddle on the floor. Before there is griping about this plot development, it has been established that there’s a portal in the bathroom and this is the first time Sookie has been threatened in the bathroom since Niall was in the portal.

Cut to six months later. Sookie is now with Alcide, who has a haircut. Bill has written a book about Hepatitis V and is on TV being interviewed by Lawrence O’Donnell (playing himself). Sam (Sam Trammell) is now the mayor of Bon Temps. He has teamed up with both the black and white ministers in town to get the word out to the population. Hep V affects only vampires, and has created a sub-class of infected, dangerous packs of vamps. Healthy vamps, however, are stronger than their infected kindred. Sam and Bill have come up with the notion, endorsed by the ministers, that each human should form a relationship with a healthy vampire – blood in exchange for protection. Some humans reject this outright, but many accept the concept and start finding partners at a party at Bellefleur’s (formerly Merlotte’s), which has been taken over by Arlene (Carrie Preston).

Jessica offers to protect Andy and Adilyn without anything in return. Tara (Rutina Wesley) is approached by her mother Lettie Mae at this event. Lettie Mae apologizes not just for rejecting Tara when Tara was first made into a vampire, but for being a bad mother throughout Tara’s life. Lettie Mae remembers that she was so lost in depression and alcoholism when Tara was a child that there were days when she didn’t feed her daughter. She wants to make up for it now.Tara at first says no, but then accepts and feeds on her mother as Lettie Mae embraces her.

Bill approaches Sookie – they haven’t spoken in six months. Sookie is civil. Bill wants to protect Sookie. Alcide is offended and Sookie says she’ll take her chances without Bill, who couldn’t be trusted even on his best days. Bill says that Alcide isn’t powerful enough to protect Sookie from what’s coming.

And then we see what’s coming, which is a big pack of shambling, infected vampires that seem very zombielike – hence, zompires (a word invented by others, long before this review was written).

The set-up for Season 7 therefore looks very promising. Vampires vs. zombies sounds like a fun horror mash-up. Most of the relationships contain highly watchable elements. After four seasons of hit and miss, it’s swell to see Sookie and Alcide as a couple, as Paquin and Manganiello have potent chemistry (though it’s startling to see Alcide with short hair). It’s great that the writers have figured out a way to give both Trammell as Sam and Preston as Arlene more to going forward.

The sequence between Tara and her mother epitomizes TRUE BLOOD at its best. Plenty of other shows have reconciliations between parents and adult children, but none have this resolution. Having Jessica work out penance with Andy and Adilyn also seems like fertile ground for drama and comedy.

There are also nice little riffs, like Jessica’s vampire boyfriend James (Luke Grimes) performing at the party, and Adilyn and Violet both responding so positively to Sookie.

Season 6 had its peak last week with “Life Matters,” but “Radioactive” is lively enough, with a good balance of drama, danger, sex, humor, splatter and all the other things that make TRUE BLOOD the outstanding craziness that it is. Of course, it would also be nice to know what the heck happened to Eric – and his progeny Pam (Kristin Bauer von Staten), who takes off in search of him. Doubtless answers – and vampire/zompire/human warfare – will be provided in Season 7, which will be welcome when it arrives next year.