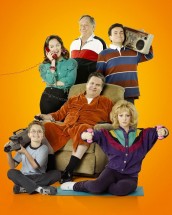 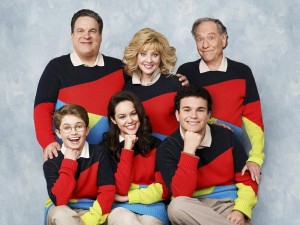 There’s a lot to be said about the 1980s, especially if you grew up in them. The material is ripe for the picking in the appropriate hands, in this case those hands would be that of Adam Goldberg whose THE GOLDBERGS is loosely based on his own life growing up in during that decade.

The premise is simplistic in its rarest form. A family of five dealing with everything a typical family deals with but instead of present day times Goldberg decides to pilfer from his childhood instances that may have either traumatized him or strengthened him for adulthood.

The ’80s was a time when parenting was less involving and less evolved and cell phones,  personal computers and iPhones were not even thought to be possible. Eight track tapes, cassettes, even albums were how music was expressed to its audiences. Head phones as big as Princess Leia’s buns were used to have a solo experience with the toons. And yet, something more authentic, more genuine occurred back then…people dealt directly with people. There was no shielding behind electronic devices. Answering machines were just becoming the norm and call waiting was a new discovery.

Goldberg, a child of the ’80s, explores those times in THE GOLDBERGS from first hand experiences, some we can relate too, others perhaps visually enhanced for a sitcom audience. The truth is that although it is amusing to go back in time and be reminded of what once was, the  more important question is….is this particularly family interesting enough to make a date with every week? Once the nostalgia wears off what have we got left?

The show definitely has a WONDER YEARS vibe to it, complete with narration, and although the premiere had some mildly amusing moments in it, whether it has lasting power to keep our attention and to hold up beyond the, “Ah that was true in the ’80s…how funny to see that again” moments, well, we will have to wait and see