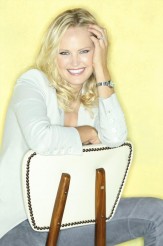 The premise sucks, but the actors make this mess work 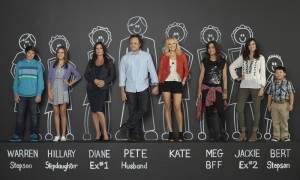 Face it, TROPHY WIFE is a terrible concept for a TV series. A hot young blonde named Kate (Malin Akerman) falls for an older man Pete (Bradley Whitford) and marries him. A year later, she’s not part of an integrated family that involves his two ex-wives and his brood of three kids.

Now the hot blonde has to be mommy and peacekeeper. Ugh!

It’s a new take on a familiar premise, and it really asks way too much from the viewer, but strangely, the cast makes this work. What should be cloying caricatures, instead has a little more balance to it. And even if you can barely see the chemistry between Pete and Kate, you do see the actors really striving to rise above a stale concept.

Akerman gets considerable credit for her comedic chops here. She does find layers within the bubbly blonde persona she’s forced to portray – and she gets some considerable physical comedy to engage in. She’s funny, which is good. Whitford, who is always excellent, is too much of a straight man here. It would be nice to see him let loose more in future episodes, but, he elevates anything he’s in regardless.

The kids are sitcom annoying, and not much else. They’re the least interesting thing in this mess. Ditto for Pete’s task masker of a first wife Diane (Marcia Gay Harden) who is a ball-buster to the nth degree. However, his second wife Jackie (Michaela Watkins) is the most interesting character of them all. She’s flighty and a free spirit and Watkins (a former SNL alum) really makes her fascinating to watch. She’s quirky without being over-the-top and grounded without being bland. Even though Akerman gets to showcase her physically comedy skills, Watkins gets all the best lines.

Still, TROPHY WIFE isn’t very good. It’s another comedy about a family, on a network that’s all about families. It also has the unfortunate title of TROPHY WIFE. Still, creators and executive producers Sarah Haskins & Emily Halpern alongside long-time THE OFFICE writer/E.P.’s Lee Eisenberg & Gene Stupnitsky seem to create some clever moments mixed within the blandness.

The other thing that is quite annoying, is the most interesting part of this story, is the year in between Pete and Kate meeting and getting married. How did that happen? Why? When the show takes a jump cut to one year later, all the fascinating growing pains and drama was immediately thrown out the window to tell a rote sitcom premise. How is it, a hot, unhinged woman like Kate would essentially settle down to play mommy to three kids and deal with two very present ex-wives?

TROPHY WIFE is not something I would watch on a regular basis, but there is promise here.  And yes, it could have been a whole lot worse. With such a great cast, I don’t want to rule out its potential, but it would be nice if someone could come up with a comedy that doesn’t revolve around how quirky TV families are.