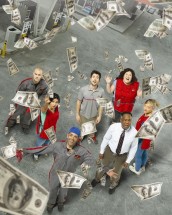 A drama that is refreshingly unformulaic, though off to a diffuse start 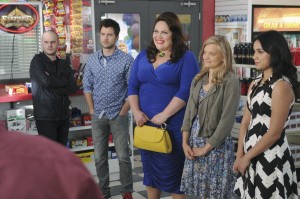 Although ABC’s new LUCKY 7 is based on the U.K. series THE SYNDICATE, it is actually likely to remind American viewers of a previous ABC series, 2006’s THE NINE. THE NINE had a group of disparate characters who were bound together by the common experience of being involved (as victims, perpetrators and/or investigators) with a bank robbery. In LUCKY 7, the big incident is a multi-million-dollar lottery win, though in fact a robbery is pivotal to the plot.

Friends and co-workers at the Gold Star gas station/convenience store in New York have been pitching in together to jointly buy lottery tickets for ages now. One day, the lucky number turns up and they’re all rich (except for the one guy who has abstained from contributing to the ticket purchase). This is going to help with concrete matters like apartment rentals and school tuition, but our protagonists are all poised to find out what money can and cannot do for them as the series unfolds. There’s also the matter of the aforementioned robbery, which has two characters to the hospital, albeit without him being able to identify them. This creates a dynamic where they’re waiting for the other shoe to drop, and where the robber with more conscience is willing to be blind to exactly how brutal his partner may become.

This last aspect represents why LUCKY 7 falters a bit at the outset. All of the characters seem a step behind the audience, so even those we really like, such as Lorraine Bruce’s big-hearted Denise (Bruce played a different version of Denise in THE SYNDICATE), we can’t quite root for because they seem so destined to do things we at least like to think we wouldn’t do – not because the actions are immoral but because they’re counter-productive. We start off with a mild sense of fear about how these people will trip up, rather than anticipation as to where their windfall may lead them.

The snippets we are shown of all the main characters’ lives gives us sympathy for them, particularly gas station owner/robbery-assault victim Bob (Isiah Whitlock Jr.) and Samira (Summer Bishil), who gets a potentially fun reversal on an arranged marriage scenario.

The overall scenario makes us curious and has a lot of dramatic possibilities. David Zabel and Jason Richman, who adapted LUCKY 7 from THE SYNDICATE, are also to be lauded for trying something different setting-wise, namely a working-class drama that’s not about cops or nurses. (Doctors and lawyers don’t really count as blue collar.) LUCKY 7 is watchable, and it doesn’t stumble out the gate, but it starts at a trot rather than a gallop.