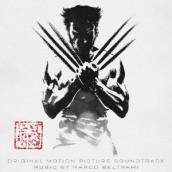 Marco Beltrami does what he does best

For a composer with muttonchops when it comes to horror scoring, Marco Beltrami has shown his talent for playing supernatural superheroes with the likes of The Crow and Hellboy. Taking multiple stabs at his second Marvel character after his berserker score for BLADE II, Beltrami actually ends up giving powerful restraint to his take on Weapon X for THE WOLVERINE. Dealing with a mutant whose powers of self-healing and longevity were God-given before his protruding finger-razors were souped-up with adamantium, Beltrami is more musically interested in playing a bub battling with his own inner demons, a man who’d far rather be left alone then being shanghaied to Japan to take care of some long-past personal business.

The result is a score for THE WOLVERINE that doesn’t start off screaming as most soundtracks of this summer type are wont to do, but instead has a real psychological build to it. Eerie bells and trembling strings convey Logan’s haunted, wounded soul, one that’s full of the kind of strikingly warped percussive effects that Beltrami excels at. And when he does what he does best, those Taiko drums blast away with bestial fury, first in the knowingly named cue “Logan’s Run.” However, the score is also less “Japanese” than you’d expect. Its most clever surprise is using a Morricone-esque harmonica that captures Logan’s man-with-no-name persona. It’s a simmering vengeance that finally takes on muscular flesh for a siege on “The Hidden Fortress,” and doesn’t let up through the raging, brass and string-blasting workout of the next several cues, giving Beltrami his second great action workout this year after A GOOD DAY TO DIE HARD. Going out with an unusually, and powerfully reflective finish of a haunted drumbeat and harmonica, Beltrami impresses with an unusually complex comic book score that’s more about inner tsuris than big razor blades, while still delivering the musical blood and thunder the fans are expecting.

Clink on the link to Purchase THE WOLVERINE soundtrack