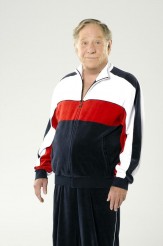 Exclusive Interview: THE GOLDBERGS star George Segal flashes back to the ’80s 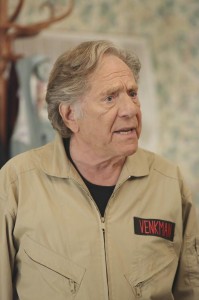 ABC has just picked up its freshman half-hour comedy THE GOLDBERGS, Tuesday nights at 9 PM, for a full season. Set in the mid-1980s, the show is based on the real-life adventures of series creator Adam F. Goldberg, then an eleven-year-old budding filmmaker (played by Sean Giambrone) who drove his family crazy by following them around with a huge video camera (the real-life footage can be seen at the ends of each episode).

Segal has been starring in films and television since 1960, earning a Supporting Actor Oscar nomination for his work in WHO’S AFRAID OF VIRGINIA WOOLF? opposite Richard Burton and Elizabeth Taylor. He starred in seven seasons of the NBC comedy JUST SHOOT ME and more recently played opposite Jessica Walter and Johnathan McClain in two seasons of TVLand’s RETIRED AT 35.

At an ABC event for the Television Critics Association, Segal sounds very enthusiastic about playing Albert, who approaches life with vigor and glee.

ASSIGNMENT X: This is your third half-hour comedy as a series regular. Is this where the work is, or is this a form that you actively like?

GEORGE SEGAL: Good question. This is where the work is, this [THE GOLDBERGS] came up, but this is quite good and above what you usually get to see, really funny. Because when I read the pilot, I just laughed and that’s very rare in this circus that we’re in.

AX: How is it playing a grandfather?

AX: Pops is kind of a suave character. Does it bother him that his suavity doesn’t seem to be rubbing off on the rest of his family?

SEGAL: No. I think he was just like them until his wife died. He put on airs, and I think it was the new him. I think he got laid a lot.

AX: So this is the second half of his life.

SEGAL: Exactly. This is a new reel for him.

AX: You played a ladies’ man in a lot of feature films in the Seventies – BLUME IN LOVE, A TOUCH OF CLASS and more. Do you see Pops as any kind of a through-line for those characters, how they might have ended up?

SEGAL: Yeah, why not? I think it’s a through-line and he’s a big, overgrown kid.

AX: Are they going to give Pops some romance, or has this been discussed yet?

SEGAL: Yes. As a matter of fact, somebody said there’s going to be romance. Women!

AX: Had you worked with Adam Goldberg before?

SEGAL: Never. And this has been a surprise to me, because since I started, television has really evolved, and so have the people doing it. These guys are much more together, because you think about JUST SHOOT ME – we were all still learning. There had been SEINFELD, but that’s about it. And now it’s really evolved. These guys can put a tight twenty-two minutes together.

AX: Is the pace of work any different?

SEGAL: No. As a matter of fact, I think it’s going to be easier. I’ll tell you next year, but a single-camera show is less onerous than rehearse, rehearse, rehearse and then deliver to an audience, which is the only sitcom [format] I’ve been used to. This, ABC and Sony, is a finely-tuned machine. This is incredible, the way they turn it out.