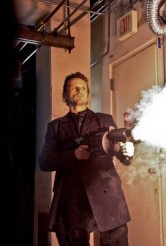 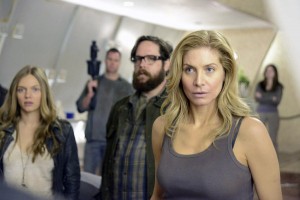 After a host of bad episodes, REVOLUTION finally got on track with its penultimate episode of the season, “Children of Men,” which saw the beginning of the explanation behind the Tower plotline that has been building up for quite some time.

The biggest question coming from this episode is: What is on Level 12?

While not all of the answers to some of the questions came in this episode but hopefully the season finale will provide at least some of the answers. We did find out that the people living inside the Tower were in fact the same people that were there when the lights went out. Because of whatever is on Level 12 they have sworn to protect it from anyone. It doesn’t matter who: the rebels, the militia or another power player.

But as Rachel (Elizabeth Mitchell), Charlie (Tracy Spirdakos) and Aaron (Zak Orth) venture to meet these people, they learn that by turning on the lights, they may in fact cause incredible damage to the world – make it burn as they put it. Of course, we have to find out next week in the finale what that actually means and Rachel says it is a slim chance of happening.

This was a good episode because it had not just a lot of action but it blended some of the much-needed emotion that has been missing from this show in most episodes. The moments with Rachel and Monroe (David Lyons) where she explains that he has the blood of her son on his hands was powerful but it also made her remember that she is not innocent from this whole blackout as well as was shown in a well-timed flashback where she and her husband are having difficulties dealing with what they have done.

The action, of course, was centered around Miles (Billy Burke) fighting the forces inside the Tower and eventually meeting Monroe face-to-face for what will hopefully be a final confrontation – hopefully because in order for this show to go in a new direction, Monroe needs to go. More than likely, he will escape and then be forced to start a new path considering the other subplot in this episode will take shape in Neville (Giancarlo Esposito) convincing some of the militia leaders to revolt against their leader who has gone off the deep end with paranoia to the point of killing his most trusted men.

This would be an interesting switch as Neville is a ruthless bastard much like Monroe but lacks the paranoia and has the people skills that Monroe falls short on. Hopefully this will indeed take shape as it will create a new, better bad guy but preserve at least portions of Season 1 – for better or worse.

So with the finale happening next week, there is not that much to be tied up. We pretty much have a reason for the blackout and most of the players involved. We know that turning on the lights may have consequences. We know that Miles and Monroe will have a confrontation with Monroe at least surviving (as the previews showed). But will it go out on a good note or fall back to being terrible like the previous four weeks?