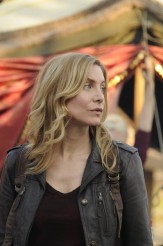 The actress also talks the finales of LOST and V 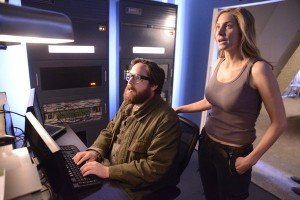 On NBC’s REVOLUTION, renewed for a second year and now coming to the end of its first season Monday nights at 10, electrical power has been gone from the world for fifteen years. In the series created by Eric Kripke, this means things are tough all over, but Elizabeth Mitchell’s character Rachel Matheson has had an especially hard time. Her family has believed her to be dead for over a decade, she’s just spent four years as a prisoner of would-be world conqueror Monroe (David Lyons), her son Danny (Graham Rogers) has been killed and she’s having a rocky relationship with daughter Charlie (Tracy Spiridakos).

In contrast, actress Mitchell – Juliet Burke on LOST, more recently human freedom fighter Erica Evans on V and Santa Claus’ spouse in THE SANTA CLAUSE 2 and 3 – says she’s having a blast enacting Rachel’s travails. At an event set up by ABC for the Television Critics Association, Mitchell, born in Los Angeles and raised in Texas, talks about playing an embattled woman in an era of crisis.

ELIZABETH MITCHELL: I try to always just be aware of what’s going on. I’m such a reactive actor – I just react to what’s around me. It’s an easy job for me if I have great people. I just listen and react. That’s pretty much my thing. So yeah, this world, it creates a completely different [environment] – you’re more protective of yourself, you’re more guarded.

AX: You’re the mother of a young son in real life. Was it disturbing for you, as a mother, to play somebody who abandoned her kids?

MITCHELL: Oh, the whole thing was hugely disturbing to me. I said to Eric [Kripke] in the beginning, “Is she a sociopath? Because why would she leave her kids?” And then [when Kripke explained] why, I understood. That makes perfect sense. She’s working for the greater good.

AX: How would you describe the relationship between Rachel and her daughter Charlie at present?

MITCHELL: I think [Charlie wants] so much to love me, but the circumstances are so tumultuous, and after four years of being tortured, first [Rachel’s] like a shell, so I think it’s hard for everybody. I think it’s really emotional and hard and there are moments of joy and connection, and then there are moments where she fails. I don’t know how else to put it. We do that as parents, we fail.

AX: The initial Rachel/Charlie reunion was not exactly warm.

MITCHELL: God, that was awful. It made me sick. We get better. We were almost in tears at the beginning of that, because we wanted it to be better – not better, but we wanted it to be something. But the truth is, how could it be? So the awkwardness that was there was the awkwardness that we had, and we were both devastated about it. And I think it was absolutely right, I think Eric did the right thing. It was cool.

AX: On a sunnier note, we know that Rachel has a romantic past with brother-in-law Miles, played by Billy Burke. Do you think that may rekindle?

MITCHELL: Gosh, I hope so. Look at him [laughs, gestures at Burke, who is across the room].

AX: And how is it working with David Lyons, who plays the dictator Monroe?

MITCHELL: The gorgeous creature? He’s unbelievably talented, he’s concentrated, and he’s the nicest guy you’ll ever meet. He talks to every single person on set, he’s kind, he’s gentlemanly. He’s an amazing actor. I think he’s capable of anything. And he’s not hard to look at.

AX: How much information are you given about your character and where the story is going ahead of time?

MITCHELL: [Kripke is] really good. I’ll call him and he’ll give me need-to-know stuff, and then if I’m really stuck on set, and I feel like I really haven’t really fleshed it out, I’ll call him or will email him and he’ll send me an immediate thing back, and it’s usually for my eyes only, and we’re asked to not talk about it with each other, so we know character-specific things. And I think that’s how it should be. We’re really careful.

AX: If the world we see in REVOLUTION came to pass, what would you miss most?

MITCHELL: Maps. I would miss maps, because I find it wonderful to explore where I am, and I love that I can get up close and find out all kinds of things that otherwise [would remain unknown], folding and unfolding every country you go to, your world. Going on auditions and not knowing where I was and having to pull over to a pay phone – I’ve been doing this for thirty years, so it’s been fun to see how it evolves. I very rarely get lost now [laughs].

AX: Speaking of LOST, how did you feel about the series finale?

AX: How has LOST affected your life?

MITCHELL: I’m so grateful to have LOST as part of my life. It was huge. I’d just had a son and I met all those amazing people and I was part of something that was so loved and well-respected and people were so excited by. I love books and it’s almost like I got to be in a classic, I got to be in one of those books that you reread and you reread and you reread, and I genuinely feel that way about LOST. So to me, I knew it at the time, I never took it for granted. I’m so grateful for that – I’m glad I’d been around long enough to know that that kind of thing doesn’t happen all the time [laughs].

AX: And how did you feel about the end of V? Unlike LOST, that ended a little abruptly.

AX: Do you feel – because you went from V to REVOLUTION – that acting-wise, you’ve been sort of in a “Fight the Power” phase?

MITCHELL: Well, I love that, I think that’s very fun. This is the first time I’ve played such an abject victim. Most of my characters are such warriors. But I like the idea of starting a woman at the beginning, before she becomes who she is, if that makes any sense. And I didn’t mind that at first, we kind of like [saying to Rachel], “Do something!” Because it changes, it evolves. Do I like that? Yeah, who doesn’t? It gets my blood going.

AX: How is it playing somebody who’s dominated by some people and yet able to dominate others?

MITCHELL: She doesn’t seem to dominate until she’s backed into a corner. So what I see her as is a pacifist, [but] you don’t want to mess with her. She’s a caged animal, basically. And I like that, because it was different from anything I’d ever played. I’m drawn to very proactive women, because I’m somewhat of a proactive woman, so I found her to be a challenge for me. Hard for me to be that dominated. And why – why would you be that dominated, unless you’re manipulating?

AX: So you think there may be a game going on with Rachel and Monroe?

MITCHELL: I think between those two characters, it’s always a game.

AX: Do you think she’s being honest now with her family and friends?

MITCHELL: Oh, yeah, absolutely. I think that she’s probably telling the truth as she sees it, but I don’t know – she has such a fragile psyche, I don’t know. I really don’t. With me, I could tell you who I’m going to be or what I’m going to do. I don’t have a fragile psyche, but she does, so I’m fascinated by that. And I’m fascinated by that weakness. We don’t usually get to play that kind of a flawed, weak character. They want us to be this or that or whatever.

AX: Do you think Rachel will eventually be swashbuckling like the other characters?

MITCHELL: I hope so. And she’s a brainiac. And she really does seem to be a pacifist. She doesn’t engage in any violence unless she absolutely has to. I mean, if her son’s in danger or something, she kills somebody [laughs]. She’s capable of so much.

AX: REVOLUTION is made in North Carolina. How is working there compared to working in Los Angeles?

MITCHELL:Wilmington I love. And I love it here [in Los Angeles], because I’ve lived here for so long. Other than Seattle, it’s a beautiful place. But Wilmington is possibly one of the most beautiful places I’ve ever shot. We’re out kind of in the boonies. We love it. And I live by the beach. It’s beautiful, the people are kind, Southern hospitality, and the beaches are pristine and amazing. So it’s just lucky.

AX: How old is your son going to have to be before you let him watch you in REVOLUTION?

MITCHELL: Eighteen. Possibly twenty [laughs]. But he knows what I’m doing on the show – he laughs about it.

MITCHELL: No. I usually just try to be with my son, always. The problem is, if I schedule too tightly, it usually turns out really badly for him and I’ve been promising him that’s not going to happen.

AX: What would you most like people to know about REVOLUTION right now?