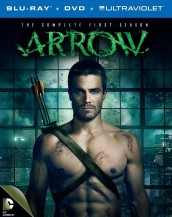 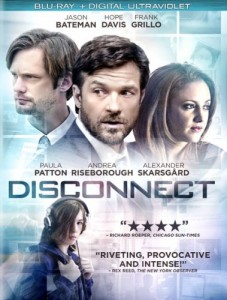 DISCONNECT – The first of two Alexander Skarsgard (of TRUE BLOOD fame) films this week on Blu-ray and DVD. Skarsgard is part of an impressive ensemble in DISCONNECT that tries to capture the world in which we live in today where cyber bulling is rampant, people turn to anonymous others for support, identity theft can happen by seemingly doing nothing and the seedy underbelly of web cam pornography. Jason Bateman, Andrea Riseborough (of OBLIVION fame) and Paula Patton are also in this well-acted, interesting thriller where all of the stories interweave. The most intriguing part of DISCONNECT is in its ability to actually show how this different moral fibers in a believable way. A lot of what is shown here is actually happening and instead of it being trite, it is actually well done and meaningful, even if some of the messages get lost along the way. 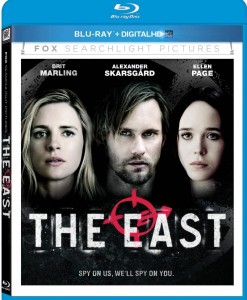 THE EAST – The second film with Skarsgard where he plays the leader of a terrorist group that target corporate leaders for the crimes against humanity such as poisoning the water supply of low-income families or creating bad pharmaceutical drugs that have profound side effects. Sarah (hottie Brit Marling) stars as a new recruit for a private intelligence firm that sends her in to infiltrate the group, know as The East, in order to bring them to justice for the crimes they have committed against these large corporations. Of course, it isn’t that easy. The people that this group is targeting are criminals themselves even if they are not brought up on charges and the more she learns about the group and those they are punishing, the harder her choices to discern her job from morality become. It is an interesting film because it makes you question who is in the right here. This group is obviously one involved in terrorism and are doing horrible things, yet those they are targeting are just as bad as these presumed terrorists. It is a pickle and gives the viewer hard choices to make if they were in the same spot. 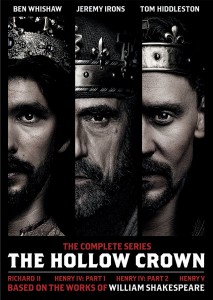 THE HOLLOW CROWN: THE COMPLETE SERIES – Finally the adaptation of four of Shakespeare’s most storied plays comes together in one complete set. This complete series includes RICHARD II, HENRY IV Part 1 and Part 2 and HENRY V. The whole idea of adapting these plays is hard because at its core it is a number of stories about politics inside of the Royal family and given this took place centuries ago, it is hard to relate. Luckily, these films capture the action as well as the drama well while keeping the tragedy that is so accustomed in Shakespeare’s work intact. It also has a great cast that includes James Purefoy, Patrick Stewart, Rory Kinnear, Jeremy Irons, Tom Hiddleston and many more. Overall, if you are a fan of the BBC films that capture these stories, this inclusion of all three in one package is a must have. 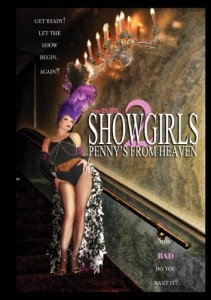 SHOWGIRLS 2: PENNY’S FROM HEAVEN – Yes, that’s right they actually (or maybe I should say finally) made a sequel to the classic post-modern class warfare struggle extravaganza known as SHOWGIRLS. But don’t expect this to be anything nearly as revolutionary as the infamous film that has been heralded as one of the worst films of all time. Clocking in at an amazing 2 and half hours, we follow the tribulations of Penny Slot (Rena Riffel, who also was in the first film) as she goes from Las Vegas stripper to a star dancer on a dance television show in order to achieve the fame she so desires. Let’s be honest, this is a bad film. But not SHOWGIRLS bad, which never considered itself bad and was supposed to be a straight film, but bad because it is made on the cheap, the acting is horrible, the sets are worse and because it is so long, just drones on and on. There is plenty of nudity here but all of the actors getting naked probably shouldn’t and the plot is thin at best. Although they bill it as a shocking and controversial film, it is milquetoast at best. 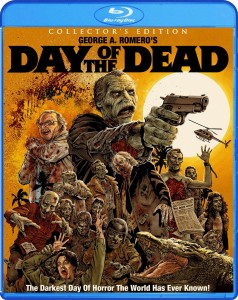 DAY OF THE DEAD: COLLECTOR’S EDITION – Another gem from Scream Factory (the horror branch of Shout! Factory) brings George A. Romero’s third zombie flick to high definition for the first time. Arguably the weakest of Romero’s original trilogy, the film follows a group of survivors from the zombie holocaust (which ravaged the world in the previous two films) made up of half crazed military and half scientists searching for a “cure” to the plague. Before the zombie film craze we have in today’s horror filled movie world, this still stands up as one of the best and goriest with plenty of nasty undead deaths and dismemberments, loads of humans getting eaten and just a truckload of unstable or down-right insane people trying to deal with a no-win situation. Of course, much of the flak for this film is because of the zombie Bob – that Dr. Frankenstein in the film tries to make docile by giving him keys to the past such as music, an unarmed weapon as he used to be in the military. He does this by giving him rewards in the form of human flesh from those that have died. Of course, this causes the crazy military guys to go even more batsh** leading the inevitable final act where all hell breaks loose. The transfer to Blu-ray is really good and all the gore and deaths are that much better. This is a must have for any zombie fan or fan of Romeo’s work. 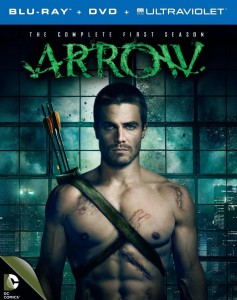 ARROW: THE COMPLETE FIRST SEASON – With the end of SMALLVILLE, The WB needed to continue to give fans a comic book show that would fill the void left by that long-running, fan favorite. Luckily, they already had a handle on a character from SMALLVILLE they could run with in Oliver Queen, otherwise known as the Green Arrow. Now many superhero television shows can be hit or miss but with how The WB handled their previous show, they had the right blueprints for ARROW and it showed in an excellent series about a guy fighting crime in a unique way. The cast is well done with Stephen Amell as Queen and his family is also really interesting as they are far from what Queen really is in life. Queen must use his billionaire playboy status to hide what he does in his free time in order to right the wrongs of the world – similar to another billionaire playboy that fights crime that wears a bat suit. However, unlike the angst that Batman has, Queen doesn’t have nearly those hangups. Along the way he fights a slew of famous DC villains (all re-imagined). The other bonus to this show is that you really don’t need to have read the comics in order to enjoy it as it is fashioned as a more action oriented series rather than needing to know any back story. With Season 2 on the way, now’s a good chance to catch up on what you missed. 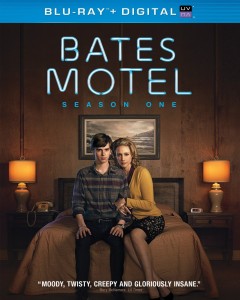 BATES MOTEL: SEASON ONE – When you have a storied character such as Norman Bates it isn’t a secret that people want to know more about the person that we saw murder a ton of people in all the PSYCHO movies. Unfortunately, BATES MOTEL is more blah than it is blood. The series does a good job of building the relationship between Norman (Freddie Highmore) and his mother Norma (Vera Farmiga) but as creepy and as close as that relationship is, it focuses too much on Norman’s attempt at being a normal person and all the characters around him, instead of the actual motel or any potential lead up to how this naïve boy would turn into a psycho serial killer. With such an amazing backdrop already in place, the motel is actually so underused that it becomes an afterthought. It should be the focal point with weird and menacing characters traveling to and fro, instead it is used as a set piece for when they have to remember – oh yeah, we have a motel, let’s have them be there while they talk about something that went on. Maybe Season 2 will do a better job of delivering the creepy rather than the boring but right now it isn’t so much about a serial killer as it is about a shy but lucky teen that has a mother that has a tight leash. 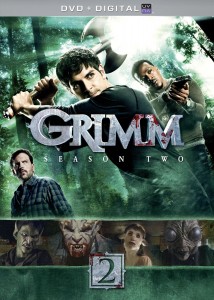 GRIMM: SEASON TWO – NBC’s gritty show GRIMM keeps getting better as Nick Burkhardt in the second season fully embraces his Grimm identity as he battles the bizarre creatures of lore that have a fondness for killing humans. The nice thing about this show is that while the plotlines are interesting as they are brutal, the cast is fun and intriguing and the personal relationships between the characters is believable and gives us more than just a bunch of good guys battling savage beasts. Season 2 is a much better barometer of what this show can be now that Burkhardt has embraced his legacy and we don’t need to deal with the whole learning to overcome his fears and fight his bloodline thing that hampered the first season. Overall, this is a fun series that has a lot of punch to it and all 22 episodes are now available for you to catch up if you missed or relive them before the third season begins. 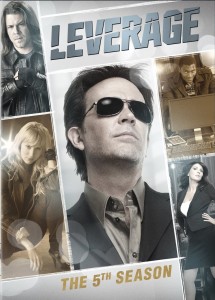 LEVERAGE: THE FIFTH SEASON – TNT’s LEVERAGE had a good run of bringing an OCEAN’S ELEVEN type heist series to television with a variety of clever and twist-inducing five seasons featuring a slew of criminals that were as odd as they were charming. In the final season, we get a slew of fun jobs as the crew continues to deal with internal strife including taking down a corrupt businessman, an ex-hockey player gone wrong, a wealthy scientist, a snake in the grass executive and, naturally, deal with the continued annoyance that is Interpol agent Jim Sterling (the always brilliant Mark Sheppard). With a strong cast headed up by Timothy Hutton, LEVERAGE will go down as one of those fun series that always would be enjoyable even if the con wasn’t as interesting or amazing as something that had come before it. Luckily, the show goes out on a good note and delivers the fans the pay off they richly deserved. 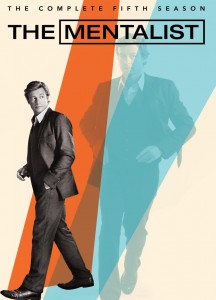 THE MENTALIST: THE COMPLETE FIFTH SEASON – The search to learn the real identity of Red John heats up in the fifth season of THE MENTALIST as Patrick Jane (Simon Baker) now has a key figure in the background of Red John in the form of Lorelei Martins. Jane uses his powers of wit and deception to earn the trust of Martins in order to convert her to his side. From the get-go, Season 5 shows that Jane is willing to be more cunning and reckless than in previous seasons because the stakes in catching Red John have become that much more important – not just in his own stake of personal revenge but to save others that may be targets. There are also plenty of back story into Jane’s past, something that is always fun and interesting, in Season 5 including his first visit to the CBI and how he joined the team. With the sixth season on tap, here’s your chance to catch up with the full 22 episodes from the past season.