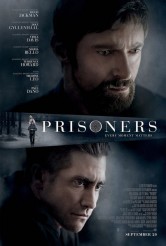 PRISONERS is a two-and-a-half-hour thriller that raises some difficult questions, making them intense and uncomfortable enough for us to ponder even after the film is over. It also boasts strong performances by leads Hugh Jackman and Jake Gyllenhaal, as well as a potent supporting cast headed up by Terrence Howard and Viola Davis.

However, director Denis Villeneuve and writer Aaron Guzikowski wind up downplaying a number of central issues – in a tale of far-reaching consequences, some matters simply evaporate by the climax, while others have unlikely logistics. If this was simply a pop thriller like, for instance, TAKEN, it would be easy to shrug this off, but these folks are dead serious (as well they should be, given that the fulcrum here is missing children). When the storytellers are playing a cat and mouse game with the viewers but want the nuances to resonate, it’s not okay to drop the ball on major plot details that become inconvenient.

Jackman stars as professional repairman Keller Dover, who we meet as he’s taking his teenaged son Ralph (Dylan Minnette) deer hunting, uttering a prayer as he does so. (The film’s American Humane Association disclaimer at the end says that “some” of the action was monitored – one can only hope that this scene was included and that we’re not watching animal snuff here, because we see the deer drop in frame with the actors.) Keller is a religious man and, as a look at his basement indicates, a survivalist who appears fully stocked for the Apocalypse, should it come. He is also a good husband to wife Grace (Maria Bello) and their kids Dylan and little Anna (Erin Gerasimovich). The Dovers are good friends with the neighboring Birth family, Franklin (Terrence Howard) and Nancy (Viola Davis), who also have a teenager, Eliza (Zoe Soul) and a little girl, Joy (Kyla Drew Simmons).

At a Dover/Birch Thanksgiving gathering at the Birch house, a camper is parked outside on the street. Anna and Joy start to play on the ladder on the back of the camper; Ralph insists they come down. Then the children want to go back to the Doverhouse to search for Anna’s missing whistle. Their parents give the okay. Ralph is supposed to walk the kids from one house to the other, but there’s a miscommunication. And then Anna and Joy cannot be found anywhere.

Enter Detective Loki – don’t read anything into that character name, it doesn’t mean he’s a trickster – played by Jake Gyllenhaal, a police officer with a high solve rate, accompanied by humanity and patience. These qualities drain away quickly from the frantic Keller, who develops his own ideas about how to find the children.

Jackman, Howard and Davis all do powerful work as people driven to the brink by grief, fury, self-doubt and guilt. Jackman’s Keller is propelled by a sense of righteous conviction, but the actor shows us the tiny bit of uncertainty that makes him fight all the harder, with sometimes horrific effect. Howard and Davis both play characters that are less sure of what they should do and play their internal conflicts with harrowing, convincing pain.

Gyllenhaal and director Villeneuve have chosen to give Detective Loki a nervous tic that seems more an acting choice than an organic character trait. Otherwise, Gyllenhaal is fine as a sympathetic, diligent figure plowing on with a tough case.

Director Villeneuve also sets the scene well, with devastating rainstorms that make us feel the cold within and without and a decrepit building that is as visually repellent and queasy-making as a structure can be.

However, because Keller is so extreme and the Birches are so distraught early on, we’re invited to sympathize but not really empathize with the characters in their torment. We’re watching rather than sharing the experience. We intellectually wonder what we might do in Keller’s shoes, but he’s too quick to go to extremes, which prevents us from identifying with him. In comparison, ZODIAC – which also starred Gyllenhaal – made us feel what it was like to try to find an unpredictable killer; here, we’re standing back and increasingly aware of the work going into the narrative.

This would be less of an issue if PRISONERS had a spectacular payoff, but instead, although the script lays out its clues well enough, we wind up asking questions. There are situations that beg physical, logical and legal credibility, and a key character that, particularly given his described mental state, has improbable endurance. The explanation for what’s going on is set up decently in mystery terms, but unless one subscribes to a particular philosophy, it doesn’t have the kind of spiritual resonance that seems intended.

PRISONERS is watchable and holds attention, but for those not sold on its specific thoughts on religious good and evil, it winds up being more popcorn than profound by the finale.