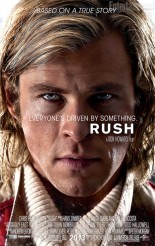 RUSH describes both the motion of the Formula One race cars at the center of this film, and the emotion their drivers get when racing them. It does not describe the pace of the film, although RUSH proceeds at a smooth pace, nor the sensation most of the audience will experience, albeit it’s perfectly watchable.

For much of the 1970s, there was a rivalry both on-track and off (the professional rivalry is documented, the personal rivalry seems at the very least accentuated by RUSH – in real life, according to Wikipedia, the two men were roommates for awhile early in their careers) between glamorous English “bad boy” James Hunt (Chris Hemsworth) and the much more austere Austrian driver Niki Lauda (Daniel Bruhl). Each man has a very different philosophy of racing, and of life, for that matter, and each finds himself goaded by the other to keep going.

There are a lot of movies about sports (and other endeavors, for that matter) where one character or another will say that a person has to be crazy to do whatever it is. Often this sounds like hyperbole, but in the case of RUSH, we’re persuaded that this might well be true of race car drivers. It’s an incredibly dangerous sport, with the film amply demonstrating all the lethal things that can happen behind the wheel and on the track, and furthermore, the hassles surrounding sponsorship are not unlike those of trying to get a movie made. (The sums of money involved seem comparable, especially back in the Seventies, when several million dollars constituted a decent budget.) One would think that, between the peril and the aggravation, there would be a compensatory sense of joy, but as depicted in Peter Morgan’s script under Ron Howard’s direction, Hunt claims that he loves racing because it brings him close to death, which makes him feel alive, while Lauda seems more motivated by a spirit of competition and a ferocious need to win than any kind of pleasure in the sport itself.

Morgan’s dialogue and the performances of Hemsworth and Bruhl make us interested in the very different psychologies of the two men, and RUSH is usually most alive when the two are in scenes together, whether comparing belief systems or just butting heads. There is something fascinating about watching two people who share such elite status – world champion race car drivers are a relatively rare breed – and yet are so utterly different trying to figure one another out.

Bruhl tackles Lauda with relish. As written by Morgan, the man thinks tact is something that was invented to obscure the truth. This, along with Lauda’s calm certainty that he is a much better driver than anybody around him, doesn’t win him a lot of friends. Hemsworth as Hunt is the visual definition of a golden boy –he arguably looks even more godlike here than when he plays Thor – and has the combination of hearty charm and underlying seething misery that make us see how he can be simultaneously the life of the party and someone who has a hard time with serious one on one relationships.

Director Howard and writer Morgan previously collaborated on 2008’s FROST/NIXON, the film adaptation of Morgan’s stage play. Oddly, the stakes in that seemed higher, though none of the characters were risking life and limb, perhaps because the heart of the piece was the confrontation between the two principal characters. In RUSH, while the evolving relationship between Lauda and Hunt certainly has an effect on both men, they are alone when driving, which is where risk, strategy and calculation are most in play. Furthermore, they are competing not only with one another, but with everyone else on the track. Their interactions are intriguing, but the crucial action for Hunt and Lauda is when each is alone behind the wheel. This spreads the emphasis of RUSH around so that it all holds our attention, but never feels like we’re experiencing anything definitive. It’s worthwhile, but not great.