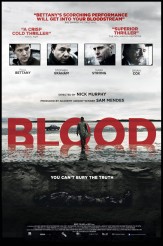 A British crime drama – hell, any kind of production whatever – starring Paul Bettany, Mark Strong, Brian Cox and Stephen Graham is going to be worth seeing. As it happens, BLOOD has merits above and beyond its cast, with director Nick Murphy and writer Bill Gallagher maintaining a near-claustrophobic tension as Bettany’s English police detective Joe Fairburn grapples with guilt, fear and rage.

Joe works in a precinct with his brother Chrissie (Graham), where their father Lenny (Cox) is a legend of old, even though the old man is now retired and suffers from mild dementia. When a schoolmate of Joe’s teenaged daughter Miriam (Naomi Battrick) is found brutally stabbed to death, Joe’s paternal instincts go on overdrive. This is combined with guilt over fumbling evidence on a previous case that allowed another killer to go free, which Lenny never fails to bring up to Joe. Something happens that leaves brothers Joe and Chrissie grappling with themselves, one another and what to do next.

The wind and the “islands,” which can be reached on foot at low tide, are given a mythic resonance in Joe’s mind. This resonance is cumulatively earned over the course of the film – but even this can’t quite provide the extra inch that’s needed for us to be persuaded that Joe is a good man pushed past his breaking point. It’s possible, of course, that we’re not meant to see Joe as a good man in the first place, but the overall sense is that this is what’s intended. Perhaps the filmmakers just didn’t have quite enough time to build up to BLOOD’s fulcrum, or perhaps they felt what they use is sufficient to put Joe in the necessary frame of mind. In any case, we can’t empathize, which means that we’re less torn than we should be by all that follows.

Even so, Bettany is engrossing as he takes Joe through a cascade of emotions with relatively little dialogue. Graham is heartbreaking as a decent man whose whole life is his blood family, no matter what they do. Cox is entirely authentic and Strong conveys a lot of power and compassion as the current commanding officer.

There is a slight whodunit element to BLOOD, but the film is much more a character study that derives its suspense from our fears about what will happen to its people and what choices they’ll make. A little more foundation in front would be a good thing, but on the whole, it works.