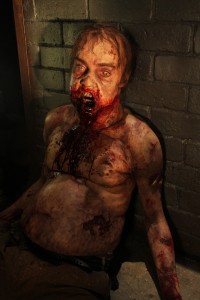 In the fifth episode of THE WALKING DEAD Season 3, “Say the Word,” Rick (Andrew Lincoln) is reeling from the loss of Lori (Sarah Wayne Callies) and goes deep down a gory spiral of blood and violence. The others try to find live-saving formula for the baby that now serves as a symbol of hope for everyone that survived the prison massacre, while at Woodbury, Andrea (Laurie Holden) and Michonne (Danai Gurira) can’t see eye to eye on whether to stay or go. The katana-wielding warrior decides to hit the road while her friend strengthens her bond with a real family man, the Governor (David Morrissey). But what’s this celebration happening tonight? Uh-oh…

After last week’s uncompromising finale, this episode’s pacing slows down just a bit to take stock and allow Rick to truly go off the rails – as indeed he has every reason to do – but with that happening at the prison and Andrea and Michonne continuing their dance around the Governor and what Woodbury might really represent, there’s a sense that for the first time so far this season, the series is treading water just a bit as it sets things up for the mid-season finale coming in a few weeks’ time.

While there’s nothing at all wrong with the episode in general – everyone is once again at the top of their game performance-wise, there are some truly stunning CGI and practical gore gags throughout (no surprise since this episode is helmed by effects guru Greg Nicotero himself), and even a few minor nods to films like THE SHINING, LET SLEEPING CORPSES LIE, and 28 DAYS LATER – perhaps its one true failing is Michonne.

As noted a week or two ago, her introduction to the series – so long anticipated by all those of us who loved her character in the comic book – has been less than completely successful so far, although last week saw her finally begin to play a role and come out from her scowling shell. This time however, her pathological fear of the Governor and Woodbury is beginning to seem almost unworkable, especially when she holds him at sword-point when all he does is try to talk to her. We know that she’s probably right but that’s because many of us have read the comics; has Michonne? Based on the information she’s been able to glean from the TV version of the Governor and his behavior, it’s not entirely possible to justify how utterly unwilling she is to give him and his community a chance.

Yes, he killed the men in that military convoy, and yes, in one of the show’s creepiest scenes so far this year, he’s keeping his “Biter” daughter locked away, but then again can’t both of those things be at least partly understood as the actions of a desperate, broken man that has lost everything and is trying to hold onto what remains of his past while protecting the community that he has built from nothing? As Andrea continues to fall on his side of the debate, it’s worth noting that when he confides in her about Michonne, he tells her the truth; Michonne is also allowed (temporarily at least) to leave.

Granted, he also says “we’re not barbarians,” something well worth remembering when Andrea discovers what passes for live entertainment in Woodbury. She momentarily rebels at the revelation that Walker-infused gladiatorial contests are the main festivities for the evening. When the Governor argues that it’s all staged – the zombies’ teeth are removed and this is about throwing a light on the monsters and fighting fear – it’s hard not to see something of his point.

I’ll be honest; the further we go along, the more I’m starting to find myself swayed by the Governor’s take on things. While there are undeniably some issues with his view of the post-apocalyptic world, he seems to have achieved results. Are we really going to see him become as vile a monster as the Governor in the comic book series? I’m not so sure.

Perhaps this episode’s most gruesome, saddest moment comes when Rick finds the room where Lori died only to discover that she’s evidently become a meal for another Walker. Counter-pointed by warm scenes with Daryl (Norman Reedus) as he naturally steps into the leadership role, and Glenn (Steven Yeun) and Hershel (Scott Wilson) bonding over their shared love for Maggie (Lauren Cohan), Rick’s tortured state is even more stark and disturbing. Where do we go from here?

Next week, might start talking to someone on the phone.