the walking dead made to suffer review 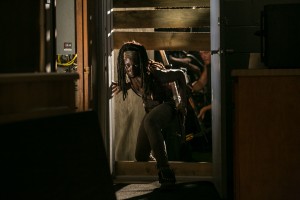 SPOILER ALERT! DO NOT READ ANY FURTHER IF YOU DON’T WANT INFO ON THE MID-SEASON FINALE

In the eighth episode and mid-season finale of THE WALKING DEAD Season 3, “Made to Suffer,” a new group of survivors make their way to Rick’s (Andrew Lincoln) prison, introducing new complications to an already unstable situation while our heroes are busy rescuing Glenn (Steven Yeun) and Maggie (Lauren Cohan) from the clutches of the Governor (David Morrissey). As war looms, loyalties will be tested, and the stage will be set for a far greater and more emotionally devastating struggle than ever before…

Tyreese (Chad Coleman) – another fan favorite character from the comic book – makes a triumphant debut in this episode’s action-packed pre-credits opener, in which we also learn instantly about his compassion when faced with a wounded friend that may turn, and later his respect for Carl (Chandler Riggs) and the power structure within the prison. In him we see the promise of a powerful new ally, and that’s something Rick will sorely need in the days ahead.

Maggie sums up the inherent evil of humanity well when reunited with Glenn, but I think we’re smart enough as viewers to get it without being told in so many words. Meanwhile, Glenn’s badassery continues when he makes a bone weapon out of a zombie’s limb; this is hardcore, buddy. Well done. Maggie is no slouch either, taking one of the Governor’s men out before an escape plan goes awry. When Rick and his team sweep in to save the day, it’s definitely a “punch the air” moment.

While that’s happening, Michonne (Danai Gurira) discovers Penny and the Governor’s mode of home entertainment, but although her showdown with him is satisfyingly intense – and leads to him sustaining a familiar injury for anyone that read the comic – there seems not nearly as much justification for her unswerving animosity toward him, and especially not for her to dispatch Penny in front of him despite him begging her not to. Sure, we now know he deserves it, but when did he ever do much to Michonne? True, Merle (Michael Rooker) and a team were sent to hunt her down, but how does she know for sure that was an order and not the racist rat acting on his own? Or am I still trying too hard to give the Governor a break?

Even as dark as the Governor clearly is – especially once we saw what he’s capable of with Maggie last week – there’s a tragic quality to him that surpasses the simple one-note villainy of his comic book counterpart. His desperate need to cling to his daughter, his final speech to his community as he admits fear and failure (in which he quite cagily – and in keeping with current pop culture – casts the attackers as “terrorists”): all these things make me see him as more a dark reflection of Rick than just a monster. And I can’t help but see Michonne as being just a bit too over-the-top and vindictive without enough reason. We waited a long time for Michonne to show up, but now that she has, she’s spent most of the time scowling and making meta-judgments that don’t ring true. Now she’s in the position of having to prove herself to Rick as well as us, but that seems a long road ahead. On second thought, given the show’s pacing, more like an episode or two.

Of course this is an episode of reunions and threads tying together too, and here at the end of the confrontation between the Governor and Michonne we have Andrea (Laurie Holden) coming upon her former friend just as she was about to deliver a killing blow to the leader of Woodbury. Letting Michonne go but seeing the strange collection her lover has amassed in his secret room, the question now is: Will Andrea look at him the same way from this point on? She keeps coming up against that wall of his expectations – he wants a sex toy more than a soldier – but she still seems unwilling to let go of trusting him. She was annoying once and got better, but now I have to admit she’s getting aggravating again. Wake up, Andrea.

There’s a fascinating moment when Rick sees Shane (Jon Bernthal in a surprise cameo) emerge from the smoke, perhaps his lingering guilt over having to kill the living descending upon him as a ghost from the past in the midst of the violent battle to escape Woodbury. The nameless man – no, it’s not really Shane – takes out Oscar (Vincent Ward), but the worst loss in the flight from the Governor’s community is Daryl (Norman Reedus), who finds himself facing the arena alongside his own brother as we leave our heroes for the holiday break. There’s no better expression of how deep the theme of “human vs. human” goes in a post-apocalyptic world than to pit brother against brother. In a way, we already had that with Rick and Shane – brothers in all but blood – but now we have Merle and Daryl, two men that took different paths and now find themselves on opposite sides in a bitter war for survival. In this case they look likely to take the same side as the Governor brands Merle a traitor and sentences them both to death.

As the Woodbury crowd calls for blood, it’s another perfect illustration of just how little distance there is between us and the walking dead.

See you in February. Until then, stay inside, stay warm…and stay alert!