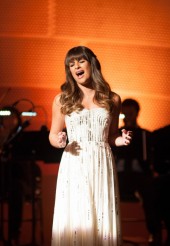 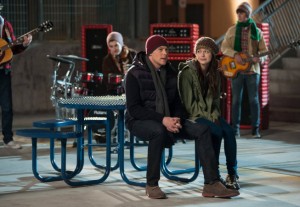 For the first time, in a long time, I’m not quite sure what GLEE is up to. After Marley (Melissa Benoist) passed out during Sectionals because of her eating disorder, New Directions lost to the Warblers.

They’re done for. No more competition for the Glee club this year. They screwed up and now Sue (Jane Lynch) has taken over the choir room for her cheerios.

Everyone is devastated and splinters off to find new groups and so, the question remains, what is a Glee club without some kind of goal to achieve?

Again, I’m not sure if GLEE will continue down the path of not making this about a competition and just have the kids singing to sing, but it’s nice that there will be uncertainty and uncertainty that isn’t resolved in one episode.

Meanwhile, in New York, Rachel is asked to perform in a very exclusive competition at NYADA, and she wins. Also, Kurt (Chris Colfer) gets a second chance to audition as well – and he makes it in.

Now all the ducks in a row are slowly forming, so it will be interesting to see where this all leads. Is a New York NYADA Glee club in the offing?

Other developments include Sam (Chord Overstreet) professing his love for Brittany (Heather Morris) who says she’s not sure she wants Sam to face the wrath of her lesbian friends online. However, by episode’s end, she wants to be with Sam

The biggest annoyance of the episode is how mean the entire Glee club is to Marley for messing up Sectionals. Really? It’s Marley’s fault? Kitty (Becca Tobin) was a major part of the sabotage, yet everyone still likes her. And yet, everyone abandons Glee, including people who have been there for years, yet it’s Marley who is the last one that stays. She wants to be there — and she’s the horrible one?

I’m also concerned the show is hinting that Finn and Marley may be an item at some point. Yes, he’s their instructor, but he’s not a teacher, so, we’ll see if they’ll go down that creepy path at some point.

And while I enjoy seeing Rachel move on and do well in New York, I’m so bored with her storyline there. And the Broadway show tunes are unbearable.

The good news is, Finn (Cory Monteith) is showing some back bone and manages to get the Glee club back together to continue singing, even if they have nothing to strive for.

The episode ends with a great rendition of the Crowded House song “Don’t Dream It’s Over” – perhaps one of the better covers in Season 4.

Storywise, the episode isn’t as grating as it could be. Again, the New York portion is feeling a bit dull, while the Ohio storyline is now just trading water until they figure out what’s next. Hopefully the show won’t have the Warblers get disqualified so New Directions are back in the competition.

Also, many of the alums who appeared in the previous episode, mysteriously disappear in this one, even though it’s still, technically, Thanksgiving break.

The good news is GLEE isn’t as annoying as it has been in previous seasons. It feels a little more grounded than usual, but the show is having a hard time switching from New York to Ohio at times.

Next week’s Christmas episode looks really good though, as it tackles an IT’S A WONDERFUL LIFE-esque story. Can’t wait.