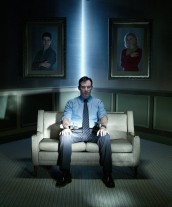 The start of a promising new series

With NBC struggling to find anything to jump start its anemic ratings, it bet big on SMASH with some okay results. Now they have AWAKE to potentially goose their struggling Thursday nights at 10:00 pm slot.

A police procedural with a genre twist, AWAKE is a promising and interesting drama about a cop and loving husband Michael Britten (Jason Isaacs) who gets in a horrible car crash with his wife Hannah (Laura Allen) and son Rex (Dylan Minette).

The strange part: he’s now living in two different realities. One in which his wife survived and the other in which his son survived. Every time he goes to sleep he ends up in the other reality.

The question now becomes (and will be the central mystery to this new series),  which is which or is there a whole other reality at play here that we’re not even aware.

There are also subtle differences to both realities in terms of the shooting style and color palette, but also in with the story too. Britten also has two different partners. One is a rookie Vega (Wilmer Valderrama) who has just been partnered with him, while the other reality has his seasoned partner Freeman (Steve Harris) of many years.

There are also two different psychologists with two different approaches and methods to understanding his current madness. Dr. Evans (Cherry Jones) and Dr. Lee (BD Wong). However, there’s a little too much of this psychobabble in the first episode, which hopefully will be toned down in the coming weeks.

The “Pilot” episode” moves back and forth between the two realities as he tries to figure out what’s actually going on. He also starts to find that his police work benefits from being in two realities. One clue in one reality  enhances the outcome in the other reality. He also finds that he’s able to let both his wife and son grieve in different ways (and can help them) with his immediate access to the other when he falls asleep.

The first episode of AWAKE is a bit chaotic at times, and it makes you wonder how this concept can sustain itself satisfactorily over the course of full season. That said, executive producer Howard Gordon knows how to steer the ship well with complex stories (see how successfully he managed the complexities of 24 over the course of eight seasons and currently on Showtime’s HOMELAND. If anyone can make this work, it’s Gordon.