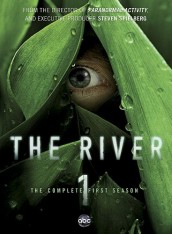 An adventurous, risk-taking series that tries to bring the found footage to the small screen with mixed results

ABC took a big chance on the found footage series THE RIVER. With only eight episodes, it was a perfect amount of time to create a mythology and tell a story without too much filler.

Of course, the format didn’t hook audiences, but I suspect that had more to do with the need to see the whole series in one big eight-hour chunk.

Now, THE RIVER – THE COMPLETE FIRST SEASON has arrived and this is the perfect way to view a series that vacillated between ingenious, daring, frustrating and just plain dumb.

You can’t win every week with something like that, but THE RIVER does try hard – very hard. When it succeeds, the rewards are exasperating and chilling, when it fails, well, it’s a noble failure because frankly there has been nothing quite like it on television.

THE RIVER hails from executive producer Oren Peli (PARANORMAL ACTIVITY) and Steven Spielberg and follows an expedition to the amazon to find a missing TV host explorer Dr. Emmet Cole (Bruce Greenwood). His wife and son are part of the journey, as is a crew that has been with Cole on many adventures. As they embark through the amazon and get closer to finding Cole, they also encounter a wide variety of strange things – from evil dolls, to cannibals and even a ghost ship.

With an overall mystery of “where is Emmet Cole,” THE RIVER finds a way to create stand alone spooky stories each episode that tie into the overall arc, but don’t muddy it in the way LOST or FRINGE does. It’s a clean, simple mythology which makes these episodes such a breeze to get through

The highlights include the pilot  “Magus”, “The Experiment” and the season (or is it series) finale “Row, Row, Row Your Boat.”

The cast is game too and even the found footage gimmick is used perfectly at times. Again, without the commercial interruptions, it works even better and much spookier.

The special features are plentiful including a featurette on the making of entitled “The Magic Out There”, there are commentaries on two episodes – the “Magus” and the finale. It’s great to hear about the making of the series and how some times practical elements were used instead of CGI. Case in point, in the finale, the possession sequence looks CGI, but it’s actually a body double who happened to be a contortionist doing all those crazy moves.

Deleted scenes are also included, but there’s nothing revelatory in them – most of them are simply interview segments and a couple of random scenes that didn’t add any other insight to a specific episode.

THE RIVER is one of ABC’s most daring projects and it’s a shame it couldn’t have continued for another season. It was great to see a different kind of spooky movie each week wrapped within the overall mythology. It was smart in how they did that, and you could see the series going in a myriad of different directions if a Season 2 was in the cards. Rumor has it that Netflix might be interested in resurrecting it – and that may very well be the perfect place for a series like this.

Found footage projects are love it or hate it prospects, but with only eight episodes to invest, THE RIVER is a must for horror fans – warts and all.