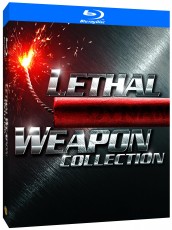 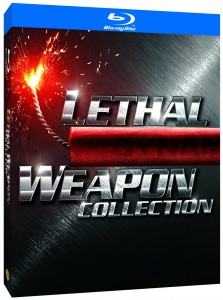 One of the most successful action movie franchises in history is the LETHAL WEAPON series starring Mel Gibson as suicidal cop Martin Riggs and his “I’m too old for this s—“ partner Roger Murtaugh.

Throughout four movies (all directed by Richard Donner), the films exemplified the perfect blend of buddy cop, over-the-top action and very funny comedy.

Now, all four films have been remastered in high-definition for LETHAL WEAPON COLLECTION in a great new Blu-ray set with a full disc of new bonus material to boot.

1987’s LETHAL WEAPON is definitely an artifact of the 1980s. It’s not nearly as good as DIE HARD which was released a year later, but it’s definitely a fun (and very dark little film) following Riggs and Murtaugh’s first partnership going after drug smugglers.

The film features such unorthodox things such as Riggs shoving a gun in his mouth and about to pull the trigger because he still can’t cope with the death of his wife. I defy any major motion picture to take its big star and do something like that in a big budget action picture.

Aside from that, many of the hallmarks that would be amplified in later installments (Riggs’ erratic behavior, his affinity for Three Stooges, etc.), LETHAL WEAPON was still a fluke  — an okay movie that became a huge success and spawned far more ambitious and enjoyable sequels.

1989’s LETHAL WEAPON 2 is the crown jewel in the series. The story is bigger, the action quite good and the humor blended in nicely with the rest of the picture. It also introduced the third wheel in the picture of snitch Leo Getz (the great Joe Pesci) who helps Riggs and Murtaugh crack down on South African diplomats involved in drug-smuggling.

The music composed by Mark Kamen with guitar work by Eric Clapton and saxophonist David Sanborn gets even more refined here and adds some of the other iconic elements that carry throughout the entire series. 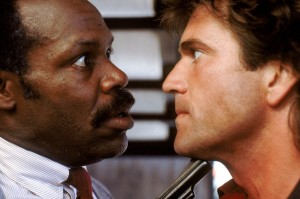 LETHAL WEAPON 3 from 1992 brings in the whole “I’m retiring in three days” routine into the forefront for Murtaugh – of course that isn’t going to go well. Black market weapons from a dirty cop (Stuart Wilson) is the focus here which not only brings back Getz, but adds Sergeant Lorna Cole (Renee Russo) to the mix. She’s a perfect match for Riggs and their courting provides some of the most enjoyable scenes in this film.

The series ends (for now) with 1998’s LETHAL WEAPON 4 which added a martial arts element with Jet Li appearing in a rare bad guy role who is part of an immigrant smuggling ring. Chris Rock also showed up too as rookie cop Lee Butters who works with Murtaugh and Riggs. Everyone comes back, but at this point, the franchise started to feel a bit bloated with trying to figure out how to give ample time to all the established characters and the new ones. It works, for the most part because Donner adds some martial arts twists to the mix, and because it’s always great to watch Glover and Gibson go at it.

The special features are plentiful with each movie featuring commentary by Donner, the theatrical trailers, archival featurettes and deleted scenes. One note – these are not the director cuts of the films that appeared on DVD in the early 2000s. Most of that material appears to be featured in the deleted scenes only.

The Bonus disc is packed with some great retrospective features including the making of the film, keeping the actors together from movie to movie and how this was really the last of the era of doing big action movies practically versus CGI. 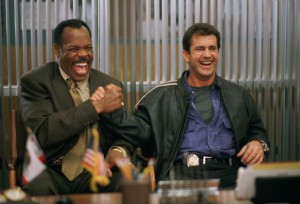 There are four of these featurettes, and they feature new interviews with just about the entire cast. The best part is Donner, Glover and Gibson reuniting (last year) to do a three-person interview for this colelction. A lot of it is them sitting around gabbing like old friends (in the Hollywood hills outside one of the LETHAL locations) – and it’s a great way to do their interviews.

It’s roughly two hours worth of material and worth every moment of it.

While there’s been rumors of LETHAL WEAPON 5 or a possible LETHAL WEAPON reboot for years, the real deal is here – four films that kept the franchise literally in the family and with a singular directorial voice. What is even more amazing is how the action sequences hold up so well. In an era where digital effects trickery is the norm in big action movie tentpoles, these films were largely done practical and that sense of wonder and “how did they do that” is one of the many reasons they’ve endured.

Murtaugh may have been too old for this “s—“, but you would be hard pressed not to find yourself sucked into any one of these movies, even if some of the sentiments and story plots have dated a little bit.

LETHAL WEAPON COLLECTION is another great Blu-ray project from Warner Bros. who knows how to package their archival films – and give added value which makes this collection more than worth the upgrade.

Click on link to Purchase: LETHAL WEAPON COLLECTION on Blu-ray