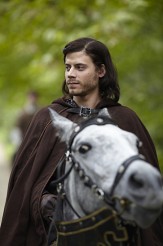 The last episode of THE BORGIAS that I reviewed I stated that the series was slowing down to a dreadful pace, and needed something to save it. Episode five, “Borgias in Love” seemed to quicken the pace and up the ante in the continuing various plotlines.

Let’s start where we left off in episode four with Lucrezia Borgia (Holliday Granger) being married off to Giovanni Sforza (Ronan Vibert) to help secure alliances for her father’s Papacy to remain guarded and intact. Episode four ended with Lucrezia being savagely raped by Sforza, and it seemed in this episode the same treatment as well as beatings is to be the order of the night for the poor girl trapped in a loveless marriage. Then Lucrezia purposely crosses paths with the beautiful stable lad Paulo (Luke Pasqualino) and her Borgia nature starts to show through. The two of them plot to un-horse Sforza when he goes hunting in the mountains so he will be broken and more manageable to Lucrezia. The plot works and Sforza gets a broken leg for his trouble, and the audience gets the pleasure of seeing the leg set while Lucrezia watches with scarcely contained glee.

Cardinal Rovere (Colm Feore) continues his tour of countries while he tries to muster support for his coming war against the Borgias. This time his travels take him to Milan where he once again encounters a lunatic nobleman, the Duke of Milan who has his nephew the rightful Duke, locked in a cage in the floor in the center of the great hall. If this series is accurate it really is showcasing how completely whacked out a lot of the aristocracy of the time was! This Duke then later in the episode when visited by his cousin Cardinal Sforza (Peter Sullivan) murders the nephew with poisoned pheasant just to take that piece off the board; and to remove any hold the Brogias might try to have over him.

Cesare (François Arnaud) continues his pursuit of Ursula Bonadeo (Ruta Gedmintas) which leads him to a duel with her husband. Cesare proves to be the better swordsman, and Ursula’s husband ends up in the river. Now it will be interesting to see if Cesare will stay a part of the Church or leave it to be with her.

The series is still exquisitely costumed and the production values are virtually unmatched by other series, and since the pace is quickening and the bodies are piling up again, THE BORGIAS has my attention! I will keep watching just to see who lives and dies in this ever growing complex series over-flowing with political intrigue.