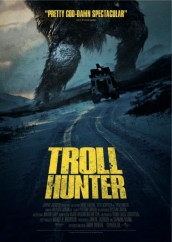 Trolls. Can’t live with ‘em, can’t easily kill them. This is the situation presented to us in Norwegian writer/director Andre Ovredal’s THE TROLL HUNTER (aka TROLLJEGEREN) which has enough moments of straight-faced hilarity to balance out its slower stretches. The film is currently available VOD and opens theatrically on June 10.

For those who don’t know much about the origins of trolls in Scandinavian mythology, they are in fact sometimes depicted as cute and eccentric. More often, they are huge, man-eating brutes. This is the case with all the various troll species encountered here.

However, one similarity between Americans and Norwegians is that the great majority of the population in both nations doesn’t believe in trolls. Therefore, when college film students Thomas (Glenn Erland Tosterud), Kalle (Tomas Alf Larsen) and Johanna (Johanna Morck) start following around the mysterious Hans (Otto Jespersen), they don’t expect to find out that he’s really a troll hunter. Hans, a depressed fellow who hates his job and thinks it’s utterly mundane, must track down and eradicate any trolls that stray out of their government-mandated troll preserves. Some trolls turn to stone when exposed to sun-like artificial light; others explode. The film students are fascinated, but the Norwegian Troll Security Service doesn’t want the existence of the creatures to be publicized.

Filmmaker Ovredal doesn’t appear to be trying to either send up or avoid American movie tropes, which gives THE TROLL HUNTER a blessed lack of self-consciousness, as well as its own distinct personality. One of the film students may invoke Michael Moore, but he’s not obnoxiously ambitious. Both the script and actor Jespersen make Hans so morose and bored that his attitude – as though he’s spraying for termites instead of taking on deadly supernatural entities – becomes progressively hilarious. There are other good gags as well, including a lot of mileage out of the lore (which predates this movie) that trolls can smell the blood of Christian men.

Unlike most of its horror fake-documentary brethren, THE TROLL HUNTER takes the step of showing us its monsters, and given that the film was likely made for very little money, the effects are impressive. The trolls have a touch of Brian Froud artwork to them, yet they are big and nasty and deadly enough to be effectively creepy.

A downside of THE TROLL HUNTER is that its deliberate pace sometimes slows down further than is good for it. Some of the swinging camera shots also make geography unduly confusing, although the Norwegian scenery is certainly lovely.

Overall, THE TROLL HUNTER isn’t the most fast-paced or sweat-inducing of the recent pack of naturalistic low-budget horror films. However, it is perhaps the drollest, driest and most effects-laden of the bunch.