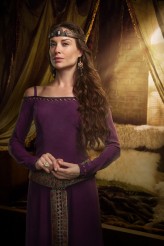 Nothing much happened today in Camelot

It saddens me when Period shows fall into all too familiar traps. So often they start of strong and then lose some of the head of steam that they had when they started. CAMELOT has fallen under this dark banner. The latest episode “Three Journeys” felt like a filler in between more important plot threads that were left out of this story’s continuity.

King Arthur (Jamie Campbell Bower) takes off out of Camelot after Lady Guinevere (Tasmin Egerton) because she has departed on her own to points unknown and the roads of the land are anything but safe. So here’s a problem that I have with this series –  more than once Arthur has just taken off to do his own thing. He leaves without any of his guards or knights, and I would think that the life of such a young and new King would be valued more highly by the people of the castle. It just seems odd to me that he is able to ride off and have adventures by himself. Now, I’m not suggesting that his knights act like a sort of Presidential Secret Service, but I would think that at least someone would stop him and make sure he has an escort.

Speaking of the knights, all of the core members of Arthur’s men-at-arms were all on a book collecting trip with Merlin (Joseph Fiennes). Merlin is still recuperating from his massive misuse of magic a couple of episodes back, and honestly he doesn’t quite seem his old self. They all ride to the home in which Arthur and his brother were raised to rescue the library that their father assembled, in order to place it in Camelot. I get that knowledge is power, and I’m an avid reader myself, but this seemed like a task that might take a couple of men and a couple of pack animals; not all of the King’s best soldiers. It just seemed like an odd use of the characters, and it also seemed like the knights and Merlin were being forced into this interaction to create some kind of dynamic between them that hasn’t been there before. In other words it just seemed forced to me.

Back over at Morgan’s (Eva Green) castle, the background of crazy-ass dark forces Nun Sybil (Sinead Cusack) is called into question when a woman arrives in court and accuses her of killing her daughter by burning the nunnery. This places Morgan between a rock and a hard place and in the end she burns off Sybil’s hand as punishment and sends the mother of the dead girl packing for daring to question her judgment. I love Eva Green, but more and more her acting skills seem to be coming from RU PAUL’S DRAG RACE. Her scenes with Morgan, especially in front of rooms of people, seem so overblown and melodramatic that she should be wearing heavier make-up and lots of sequins and feathers. This particular episode I was surprised that there was any scenery left after she was done devouring it!

I hope CAMELOT gets better again; I had this hope also for THE BORGIAS. It’s tough for period drama to stay interesting and engaging, but it can be done – just look at GAME OF THRONES.