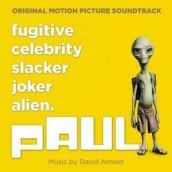 ID4's David Arnold finally gets to befriend an alien, even if he's a smart-ass

If there’s a recipe to this duo’s winning movie-movie formula, it’s walking a fine line between spoofing their source material and just going with their unabashed love of it. Ditto David Arnold right from the start with a winking 50’s sci-fi Theremin and a dark orchestra that seems to promise a mothership. When the sky spits out a wise-ass alien instead, Arnold goes for a pleasant harmonica vibe for his RV road trip with two Comicon geeks, scoring that alternately threatens to turn into “Everybody’s Talkin’” an inter-spatial BROKEBACK MOUNTAIN or a heartfelt romantic ballad for piano.

It’s surprising emotion that PAUL earnestly manages to pull off, right down to Arnold’s spot-on take on the kind of grandiloquent CE3K-style orchestra that wrapped up every ’80’s sci-fi movie send-off (including PAUL’s shout out to MAC AND ME). While it would’ve been cool to have more of Arnold’s ID4-lite action music on this album, there’s some truly inventive cues on tap, from bouncing strings and Theremin that turn into a vengeful 007-worthy car chase to FBI road rage for country guitar and orchestral percussion. By the time that PAUL waves goodbye with a soaring symphony, you might wish that Arnold got to do a “real” alien invasion score again, but the charm is that this pretty much is one, with a lot more laughter and nicer heart.

As with the soundtrack for Pegg and Frost’s first genre tribute SHAWN OF THE DEAD, PAUL actually benefits from a clever mixture of score and songs, with the usual alien goof suspects like Billy Lee Riley’s “Flying Saucers Rock N’ Roll and The B-52’s “Planet Claire” mixing it up with some fresh alien-themed songs like Max Romeo’s reggae “I Chase the Devil” and a country version of STAR WARS’ “Cantina Bar” by Syd Masters and The Swing Riders. Top that off with wonderful road trip radio kitsch like Grover Washington Jr.’s “Just the Two of Us,” and ELO’s “All Over the World,” and you’ve got a surprisingly well-thought out musical progression for PAUL’s RV ride, choices that Pegg and Frost engagingly write about in their liner notes for the thankful hard copy of PAUL’s soundtrack that exists along with its MP3 ether