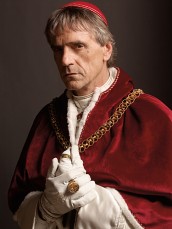 Profile: THE BORGIAS star Jeremy Irons gets religious for the new Showtime series

The actor takes five talking about his mesmerizing role as Pope Alexander VI in THE BORGIAS.

Comments Off on Profile: THE BORGIAS star Jeremy Irons gets religious for the new Showtime series 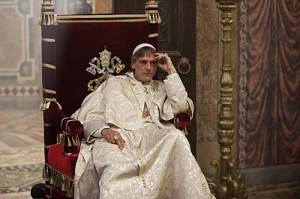 He is known to all to be one of the most gifted and natural actors of our time. Jeremy Irons proves that statement again to be true in the new Showtime series THE BORGIAS premiering tonight.

He effortlessly portrays Rodrigo Borgia, the man who ultimately becomes Pope Alexander VI. Showtime’s tagline “The Original Crime Family” suggests a hope that Irons can do for THE BORGIAS what James Gandolfini did for THE SOPRANOS.

Here’s what the 62 year old actor had to say as he takes five about his latest project.

On his character Rodrigo Borgia’s religious convictions…
“I think, like most people at that time, he has, yes, religious convictions,” says Irons. “I’m not sure all his family did. That’s another question, but I think he was a man who believed implicitly in God and his position within the structure. I think we have to remember that he was more like a king than the present Pope. In other words, the position of Pope was more civil than the position of the Pope these days.”

On what people think of Rodrigo Borgia…
“It’s very similar to – if you read the newspapers over the last 10 years –  to try to discover what sort of man George Bush is, you read a whole load of different things,” says Irons. “Whether it’s FOX [news] or whether it’s the NEW STATESMAN. It’s different opinions. And it’s the same for my character, Rodrigo Borgia. What sort of guy was he? You have to read a lot of different [things] and say, ‘Well, they would have said that because…’ or ‘That’s their standpoint.’ And you filter through all of that to try to find the heart of the character. That’s the only way I know how to do it.”

On the show’s apparel…
“I mean, they’re amazing costumes,” says Irons. “I, for about a week after we finished shooting, felt uncomfortable in a pair of pants. They’re extraordinary and very beautiful. I think the whole production, from the episodes I’ve seen, which is most of them, it’s sumptuous, I mean really sumptuous. And you can freeze frame and there’s painting after painting after painting. So we’re very lucky, very well supported.”

On his character’s morals or lack thereof…
“I think he’s a pretty good guy just doing the best he can,” says Irons. “I mean, power corrupts. It was a time quite unlike the time we live in today. There were murders in Rome every night, poisonings most weekends. There was incest here and sodomy there. You know, it was a good old rolling, rollicking society. I think it’s up to the audience to say what is good, what is wrong, what is right. I played him. I thought I was quite a good guy, but George Bush probably thought he was quite a good guy, too. I mean, they all do. Berlusconi, they think they’re wonderful. You know, everybody does. Putin, Cracher. Stalin probably liked himself. You know, it’s for us to judge them, I think.”

On modern day leadership…
“I think the hypocrisy of the modern-day thinking where we can attack the president of a country because he had an extramarital relationship that involved a cigar is iniquitous to how a medievalist would look at that and say it’s absolute hypocrisy,” says Irons. “The two things have nothing to do with each other. Of course, man is fallible. We know that. But he strives. And he may be a great leader although he’s fallible. And this was something they could understand completely. We seem to be unable to. We seem to expect our leaders to be saints, which is why we get such boring people as our leaders. Most people who have anything interesting about their lives, which will be found out when they stand to be a leader, don’t dare stand, and it’s a huge problem, I think.”