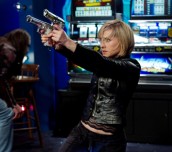 A strange, comedic riff on THE HANGOVER that works only part of the time

With SMALLVILLE being so uber-serious during its final season, when it decides to take it easy for a week and engage in its playful side, the result is the incredibly bizarro (and occasionally enjoyable) “Fortune.”

Taking a HUGE riff on THE HANGOVER, the episode starts off with the beginning of the bachelor and bachelorette parties for Clark (Tom Welling) and Lois (Erica Durance). After drinking some roofie-like wine (a spell was put on it by Zatanna), the gang wakes up the next morning with no memories of what happened the night before.

Clark and Chloe (Allison Mack) wake up in the same room, with Chloe in a bridal dress and Clark with a wedding band – did they get married? And what’s with the monkey hanging out in their room.

Throw in Tess (Cassidy Freeman) and Emil (Alessandro Juliani) singing Elvis-like karaoke and the whole episode takes on a scattershot, surreal quality (both good and for bad).

To see Clark loosen up (through the spiked drink)  is one of the highlights of the episode. A chink in the armor of the man of steel – super cool.

But even more deranged is when Lois and Oliver end up at a seedy Showgirl gambling nightclub called Club Fortune, where, in order to obtain Lois’ engagement ring, they both dress up as showgirls. Seeing Hartley in drag is actually pretty funny – and even funnier is watching him kick-ass in the showgirl outfit.

By episode’s end, it’s clear Lois has committed to her relationship with Clark and is not going to be running away (like she has in the past). We also learn that Chloe did not marry Clark, but rather she married … SPOILER ALERT … Oliver.

Chloe also gives a goodbye speech to Clark – and probably her last contribution to Clark’s journey to Superman. She essentially says she’s leaving Watchtower and wants to end up being a “super-hero” builder to allow them to see their potential. She’s going to do this by taking a normal newspaper job by day and do her superhero building by night.

She says she’s met some incredible people while away including a billionarie with a lot of high-tech toys and a “wondrous woman who will throw you for a loop.” It’s nice to see the show allude to D.C.’s other big heroes, which means the legacy of Superman will join those other future Justice Leaguers a few months (and a handful of episodes) away.

There also was a nice moment with Chloe and Oliver showing that, not that they’re married, Chloe can’t run away from him that easily again.

“Fortune” is a strange episode, in that its HANGOVER lifts prove to be a bit distracting at times. It’s a great set up for the smaller moments in the episode, but it also detracts as well. It’s a little too weird, and mixes so many different tones and styles that it doesn’t fully gel until the end when we get some actual drama.

Granted, I love the lighter feel to this episode – and there are moments that are flat out hysterical, but I’m still not sure it worked as well as it should have.

Still, it’s always refreshing for a show like SMALLVILLE to take a little baroque detour in its last season – even if it will be leaving you scratching your head by the time the episode is through.