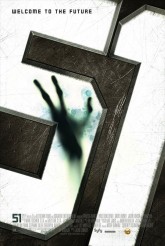 A tight, entertaining tale of angry aliens on the loose in you know where

Movies that premiere Saturday nights on Syfy have a tendency to be, well, bad. Sometimes they’re so bad they’re wonderful (SHARKTOPUS was one of the great schlock joys of recent memory), but it’s still something of a surprise to see a Syfy Saturday premiere that’s actually good, with no qualifiers.

AREA 51 deposits us at that famous Air Force base in the Nevada desert (actually filmed in Baton Rouge, LA, but the right establishing shots keep us from telling the difference) on a day when the military powers that be have decreed that the extremely reluctant Col. Martin (Bruce Boxleitner) must allow reporters onto the base for a look around.

The plan is for Martin and his airmen (and women) are to let journalists Claire Fowler (Vanessa Branch) and Sam Whitaker (John Shea), along with their camera people, think they’re getting a scoop, while actually keeping them away from Area 51’s true function. It just so happens that the one of the aliens being held on Area 51’s third level isn’t neither as passive nor uninformed as his captors imagine and makes the most of the opportunity provided by the visit. This leads to a fair amount of mayhem.

The scary stuff here is pretty well done, as the stuff that’s meant to be menacing actually looks fairly nasty and there are some pretty cool practical creature effects, albeit there are a couple of designs that could stand improvement (one is fairly cheesy, but it’s not something meant to be scary). It also helps that the script by Kenny Yakkel, from a story by Lucy Mukerjee, gives all of the characters a bit of background and motivation, particularly two Air Force personnel, well-played by Rachel Miner and Jason London. The narrative is nicely layered, with all of the humans trying to outmaneuver each other at the beginning and some surprises from the aliens.

Director Jason Connery keeps momentum going and shows that he can inject humor and shock without going for camp. There is a good sense of tension when characters have to go forward into pitch-black spaces. Both in terms of narrative and fear factor, it works very well to have several different aliens with completely different behaviors, so that we’re either in the midst or on the brink of perpetual but varied havoc.

As Saturday night sci-fi features go, AREA 51 is a pleasure that can be enjoyed without guilt.