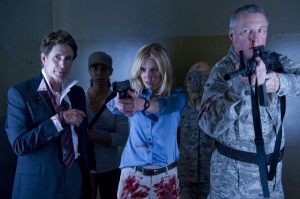 Area 51 is the real U.S. Air Force base where it has been rumored for decades that the remains of alien spacecraft and possibly some actual aliens have been locked away from prying eyes by the military.

AREA 51, the movie premiering on Syfy tonight at 9, takes this set-up and asks what would happen if visiting journalists, while being steered away from the base’s most unusual sights, were inadvertently the trigger for all hell breaking loose. Bruce Boxleitner, Rachel Miner and Jason London star as beleaguered Air Force personnel, with Vanessa Branch and John Shea as the reporters. The screenplay by Kenny Yakkel, from a story by Lucy Mukerjee, is directed by Jason Connery.

Although Connery has been an actor for most of his life, he has branched into directing in the last few years. His first two films, PANDEMIC and THE DEVIL’S TOMB, are also in AREA 51’s  sci-fi/horror genre. Connery gives this interview by phone from Louisiana, where he’s preparing his fourth film and first directorial foray outside of sci-fi, THE PHILLY KID.

ASSIGNMENT X: How did you get involved with AREA 51?

JASON CONNERY: I heard about the script through my manager and read it, did notes on it, and then went in and met the producers. I was saying how I wanted to shoot it, which was, it starts off quite calm and smooth and glidey with the Air Force in control, and then slowly, as things disintegrated, I got more hand-held and the lighting got a bit more jagged and it all got a bit more chaotic. The hand-held stuff you can shoot somewhat quicker, which is better when you’ve got a short shoot.

AX: When you got the script for AREA 51, were there already as many different extraterrestrials in it?

CONNERY: Yes. In fact, there was another one, a little tiny one, but I really felt like he was used as a device and he wasn’t as established as he could be, and so I felt like there was a way to get what one needed from him being a character without actually having him. I felt like [the remaining amount] was probably enough. 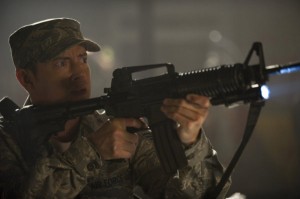 AX: Is the creature stuff mostly practical or CG?

CONNERY: It’s practical. [The tentacles are] CG – I don’t know where you would get a tail that would work like that – but the monsters are practical.

AX: How big are the monsters?

CONNERY: Well, Little Devil is small, probably about five foot tall, and Lady Death, the big one, is probably about nine foot tall, maybe ten foot, because there were extenders on his legs. I tried to make it as little suitlike as possible, so that one wasn’t constantly thinking, “Oh, that’s a man in a suit.”

CONNERY: Yeah. Hopefully, you care a bit about the various storylines. You hear about Rachel Miner [as] Hannah going through what she went through and Shoe [played by Jason London, having a painful back story] and the colonel is obviously slowly beaten morally because of the fact that for thirty years or whatever, he’s toed the Air Force line and how he realizes that the fact that they experimented on these beings, that maybe it wasn’t the thing to do. In the original script, the whole thing of Patient Zero watching the autopsy of his partner [via playback] wasn’t actually there. I created that because I felt like I wanted to have some empathy for what was going on and understanding what it was trying to find out. And I suppose the moral question is, if one does find beings from other planets, do we have a right to cut them up, just solely to further our own race?

AX: DEVIL’S TOMB also had characters dealing with monsters in a confined space. Were there elements of AREA 51 where you thought, “Well, I didn’t get to do that last time round, but I’ll try it this time,” or, “We did it this way last time and it didn’t really work, so we’ll do it this other way”?

CONNERY: Well, in some respects, THE DEVIL’S TOMB and this film had a quite a few things that were similar in the sense of being underground and in a base, but I think that I definitely had things that I knew that would work, just the way you get into a scene in a confined space. I’m not sure that I used stuff that I thought to myself, “Oh, I can steal from what I did there,” or “Remember not to do that, because it was a nightmare,” but this is the third feature [as a director] and I’m hopefully learning all the time, so I felt a lot more at ease about putting together the scene. That’s about as much as I thought of it.

AX: A lot of the film takes place in darkened areas. Did you have to be extra-careful with the lighting for those scenes?

CONNERY: Yeah, I think that there’s a very happy medium. I wanted to crush the blacks and saturate the colors a bit. I wanted to make it warmer upstairs and sort of colder downstairs. With a film, especially a low-budget film, my preference is, if there’s a corner that isn’t dressed very well or doesn’t look as you hoped it would, then don’t light it, because the bottom line is, apart from anything, it adds more atmosphere and it’s spookier if there are places which aren’t particularly lit. Obviously, I want to light faces so that we can see what’s happening and what they’re saying, but sometimes I think it really adds to a scene, for instance, not to be able to see certain areas. Syfy is aware of the fact that some people have better televisions than others, and they don’t want to have a whole group of people who can’t see what’s going on, but I also think it really adds atmosphere not to have everything brightly lit, especially in a movie that’s meant to be creepy.

AX: You’ve got genre veteran Bruce Boxleitner as one of your leads, the colonel in charge of the base …

CONNERY: I really like Bruce Boxleitner as an actor and he comes to work ready to work. On a film like this, you need someone with genuine enthusiasm, and he has that in spades, so that was fantastic.

AX: The door seems open for a sequel at the end. Would you be up for doing that, if there is one?

CONNERY: Oh, God, I never even thought of that. [laughs] I don’t know. I did have fun. I wouldn’t mind a few extra days and a little more money, but I guess everybody says that.

AX: And what can you say about THE PHILLY KID?

CONNERY: PHILLY KID is an action film set in the MMA world. It’s an action film for Joel Silver, getting made through After Dark, which will be distributed through Warner Bros., and it’s written by a guy Adam Mervis. It’s really of hard-nosed, tough script. He’s got a very natural and tough delivery. It reminds me of one of those kind of James Crumley/Elmore Leonard tough guy [stories], without being over the top. It’s not an action man, it’s very realistic tough.

AX: Was this written for a specific martial artist?

AX: After making three sci-fi/horror films in a row, are you looking forward to doing something that doesn’t have weird bacteria and/or creatures?

CONNERY: I am. I mean, I’m looking forward to doing something that’s of a different genre. I like science fiction, I like thriller, I like horror, but it would be nice not to have a lot of special effects going on all the time and get into some real acting scenes. Not that there aren’t [acting scenes] in the sci-fi, but it’s tough when you’ve got aliens, especially four of them, because there’s always slime and people running around, blood and makeup and getting their head on and putting their eyes back in and all that kind of thing [laughs], so it would be nice to not have that for awhile.

AX: With all the directing gigs, are you doing any acting?

CONNERY: I just did an episode of CRIMINAL MINDS: SUSPECT BEHAVIOR. I just did one day on it, but it’s a very nice set. I’m in the episode called “Girl With the Blue Mask.” I met Forest Whitaker and Beau Garrett and all of them. They were very nice. And I enjoyed it, actually, although I found myself talking to the crew all the time. When you’re directing, you talk to the crew more, and when you’re acting, you talk to other actors more, so I think it was a bit weird. I kept asking the d.p. about stuff. Usually crew members are a bit freaked out when an actor talks to them – “Why is he talking to me?” [laughs]

AX: Do you know what you’re directing after PHILLY KID?

CONNERY: The way I work – AREA 51 was a little different, in that there was a script and there was a budget and they were ready to go somewhat, and it’s the same somewhat with PHILLY KID, whereas usually what I do is take a writer and develop a project with them and then take it to places where there’s hopefully some money – at least, that’s what I did with the first two. I have a film that could be a co-production to be shot in England called THIS GUEST OF SUMMER and then I have this romantic comedy, which is with Hallmark Films. I’d like to try and have a go at different genres. And then I have a hard-boiled political thriller. So I’m just sort of throwing stuff up and seeing what sticks.

AX: What do you hope people come away from with after seeing AREA 51?