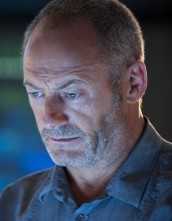 In the premiere episode of OUTCASTS, the short-lived BBC series that has already been cancelled over in the UK even as it premieres on BBC America for a single eight-episode run, tensions are rising at the fledgling colony town of Forthaven on the planet Carpathia. A planet in a “Goldilocks zone” that suitably replicates most of Earth’s environment for human habitation, Carpathia has become a destination for the last of Mankind fleeing a doomed, war-ravaged Earth.

Things are not going well ten years after the establishment of the colony and five years since the last transport arrived. A splinter group led by gun-happy Mitchell Hoban (Jamie Bamber) is planning to abandon Forthaven and go it alone, his wife Karina (Jessica Haines) suffers a devastating attack that leaves her comatose, and President Richard Tate (Liam Cunningham) makes contact with an incoming transport ship that may not make it through the planet’s unforgiving upper atmosphere. Has humanity merely traded one mass grave for another?

I had read and heard so much negative feedback on this series since its UK airing that I braced myself for the worst when sitting down to view this premiere. What I saw, however, did not at all deserve the level of vitriol that has built up around this failed sci-fi thriller. Although this is only the first episode, the show already displays a proper focus on characterization and a lot of potential to build a mythology that sadly will never come to fruition.

If I had to compare it to anything, I would say that in its first installment OUTCASTS owes more than a little to Ray Bradbury’s colonization-themed SF literary classic, THE MARTIAN CHRONICLES. There are a number of similarities, from the fate of Earth and the ramshackle colony setting to the mysterious Mitchell. His brief conversation with his son Linus (Teague Bidwell) at the lakeside plays like a dark version of the one in the novel’s “The Million-Year Picnic” chapter, and his behavior makes me wonder if Mitchell is indeed the same man that was such a hero early in the colonization or if on one of his excursions he was either seduced by some alien culture a la Bradbury’s Spender or perhaps completely replaced by an alien. We’ll see…or will we?

The production values are excellent, with great location shooting and some very nice ship design. The colony setting is also well realized, with eerie alien sunlight streaming into beige and corrugated gunmetal corridors that capture the feel of a struggling settlement that has turned into a prison for some and a fading oasis for others.

The episode also sets up a number of mysteries. There’s Mitchell of course, whose presence will surely loom large even after Bamber bows out. There’s the C-23 virus that apparently ravaged the colony and robbed the President of his family. And when Cass (Daniel Mays) and Fleur (Amy Manson) track the deserting Mitchell into the wilderness, they have a brush with what may be a previously undiscovered alien life form. With all those elements to play with in the coming weeks as well as the potential for lots of cross-relationships like the odd pairing of Security Chief Stella Isen (Hermione Norris) and bad boy Tipper Malone (Michael Legge), there’s certainly plenty of material to keep things lively for a while.

OUTCASTS was intended as another survival-based character study like LOST or THE WALKING DEAD and countless others before it, and it set up one of its most basic themes in a tense final scene when Mitchell, Cass and Fleur are in their final stand-off. Mitchell bitterly asks Fleur if she really thinks humans can live in peace and build a better world. She says yes, but her actions belie her intentions. As always in such tales, humans can be their own worst enemies.

While no one character stands out as exceptionally fascinating or magnetic, there are competent performances across the board and with time – the one thing this show will never have – someone (or more than one) might emerge as a breakout presence. I could as easily not care about these people in a couple weeks or grow to like them enormously. Only seven more episodes to find out which, which brings up another question.

Is this show even worth watching? We know it has no future, but since the debut episode does a nice job of setting up a few storylines and introducing interesting characters while showing it has the power to engage our emotions – the descent of the transport in the final minutes is moving thanks to convincing tearful acting by Norris as well as groundwork laid earlier by Cunningham and Patrick Lyster as Captain Kellerman – maybe it’s worth just seeing what might have been.

Next week the Carpathians will find out if anyone survived the last transport, including the enigmatic Julius Berger (Eric Mabius), and the truth behind the deadly C-23 virus – as well as Mitchell Hoban’s role in that incident – will become clear.