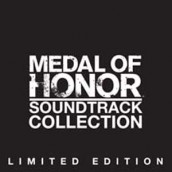 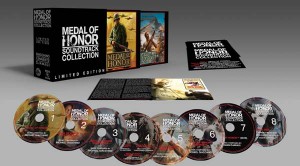 Having conquered movies and television with his particular brand of Americana, it was only natural for Steven Spielberg to apply his excellent production values to a brave new world of home entertainment. Console fare had certainly evolved beyond the 8-bit by 1999, the year when Spielberg decided to jump into the fray with Electronic Arts for the first MEDAL OF HONOR release on November 11th– a day that shall live in glory for videogame franchises, let alone for marking the real first step of taking their music seriously. For a director whose product was renowned for its production value, Spielberg wanted to bring the quality of a major movie score to the genre. Not only were the majestically thundering soundtracks that got MOH off to a bang infinitely beyond the wonderfully cheesy synth bleeps of yore, but they also established a former Disney publicist named Michael Giacchino as a musical force to be reckoned with.

It’s the first two CD’s of this MOH box’s 8-disc set that contains Giacchino’s MEDAL OF HONOR and MEDAL OF HONOR UNDERGROUND, soundtracks which still stand as the best of a worthy lot. These were the MOH scores to rule them all, setting a tone of brass nobility, soaringly distinctive orchestral themes, valorous drum timpani, and an overall feeling that these games were dedicated to the American fighting man, as opposed to crassly dishonoring them as playthings to be manipulated by some punk kid’s Playstation controller. Beyond drawing on the rich history of every classic Hollywood war score anthem from PATTON to MIDWAY, Giacchino’s rollicking action runs also brought to mind another certain Fedora-wearing Nazi buster. Yet the gigantic John Williams influence that runs through these early MOH scores is always a big, loving valentine as opposed to a knock-off.

Maybe more than any other composer whose worked packed an obvious love of STAR WARS, SUPERMAN and RAIDERS OF THE LOST ARK, Giacchino had an innate sense of how to use symphonic melody, gradually building the Williams scoring trademarks into his own distinctive voice. With their thrilling motorcycle chases, tank battles and U-boat rides MEDAL OF HONOR and UNDERGROUND are essentially the scores to the Indy movies that never were, conveying a sense of daredevil, wisecracking energy and honor, as if Jones had decided to enlist for The Man. You could even go so far as to say MEDAL is to RAIDERS with its breathless action runs that the French-tinted UNDERGROUND’s dark atmosphere is to TEMPLE and the LAST CRUSADE. Topping both CD’s off are enjoyable period source cues, complete with a German narrator extolling the swing of herr Giacchino.

Giacchino truly grows into his own with FRONTLINE on disc 3. Like any good franchise composer, Giacchino continues to make his striking MOH theme a melodic through line as he drops the soldier-gamer into the disastrous Operation Market Garden. It’s also in this battle (told with far less excitement onscreen in A BRIDGE TOO FAR) where MOH really gets into the darker, more melancholy nature of WW2. A beautiful, haunting female voice and chorus are added to the mix, particularly for a truly moving ode to the devastated Netherland town of Arnhem- music that conveyed the kind of tragedy that Spielberg and Williams would graphically deal with in SAVING PRIVATE RYAN. True emotion had at last come to video game scoring, not only making players feel for the struggles of their soldiers, but also turning giving the collateral damage of first person shooter’s a human face.

As the now multi-platformed MOH series moved into full-on fighting mode, Giacchino would land in the African theater for ALLIED ASSAULT. It’s a score with an especially enjoyable old-fashioned orchestral touch, packing Arabic and African rhythms that would be right at black and white home with Bogie and the soldiers of 1943’s SAHARA. Giacchino then passed the baton to another young, promising composer named Christopher Lennertz with PACIFIC ASSAULT, which brought Asian instruments to the now-trademarked military approach of the series. Yet Lennertz’s own swirling action and valorously elegiac approach were most definitely his own, giving another hundred orchestral gun salute to everything that was best about the military sound. Lennertz makes an ever-stronger impression on his return to the Pacific with RISING SUN, showing off his own Indy-Williams- worth symphonic arsenal. If Giacchino had started out with daredevil grace under pressure, Lennertz’s climactic MOH score was brazen adrenalin, full of drum-heavy action and panicked orchestrations. Yet Lennertz also creates a touching, mournful chorus and a soaring hymn to Brothers Lost to give this music patriotic weight far beyond a video game.

Though more than established with the likes of THE INCREDIBLES, MISSION IMPOSSIBLE III and LOST, Giacchino wasn’t too big for his britches to return to the MOH franchise with 2007’s AIRBORNE. Right from his gutsy main theme, AIRBORNE shows a composer who’s truly mastered his craft. Once again bringing on feature-worthy orchestral impact, Giacchino score means dark, furious business, with much of the light-heartedness of his groundbreaking entries subsumed by tense, gritty suspense and action runs, a score that’s all about symphonic guts and glory that sends Giacchino off into the sunset with a gigantic salute to the MOH theme that started it all.

The series would dispense with that melody altogether, as well as its WW2 setting when the series rebooted forward to the contemporary Middle Eastern conflict for MEDAL OF HONOR. Going the percussive-rock beat that now sets the tone for many first-person shooters, MEDAL took the equally bold move of bringing Ramin Djawadi into the fray. A rising star of action movie scoring with the electro jams or IRON MAN and the ethnic orchestral action for the revamped CLASH OF THE TITANS, Djawadi’s MEDAL does a respectable job of firmly putting its special ops into a dusty land where danger can strike at any moment. In a war without the easy demarcation of Allied good and Axis evil, the MEDAL series now packs a mournful, unresolved quality beyond its requisite pan-Arab rhythmic thrills. Like such feature scores as BLACK HAWK DOWN, THE GREEN ZONE and JARHEAD, Djawadi’s HONOR conveys the mean-ass thrill of fighting the ethnic bad guys, but without the exhilaration of God and Country. Its moodiness that captures the feel of warriors kicking ass in a ar zone where the end game is a mix of futility and the rush of surviving.  While this HONOR might be a bit of a downer as such, there’s “fun” to be had as you toast your targets with quirky country metal and electric guitar rap added to the Middle Eastern mix. Better yet, Djawadi is sure to have his own strong theme and chorus that directly links this HONOR to the previous entries’ sense of sacrifice.

When so many box sets are going to town with unnecessary bells and whistles that make them unobtainable for the average Joe, let alone G.I., La La Land packs tremendous value into its hours of listening, from an 8th disc of alternates and outtakes from RISING SUN, EUROPEAN ASSAULT and AIRBORNE to a lavish, photo-filled booklet. Inside, liner note writer Dan Goldwasser does a war correspondent proud with his excellent job of chronicling the MOH saga through interviews with its key production and musical players. As you read about their commitment to the saga, your imagination can’t help but fill in the startling CG images with the idea that they’re flesh and blood fighters, taking on Hitler, Tojo and terrorists with all the inspiring bravado accorded to the likes of George C. Scott, Charlton Heston and Matt Damon- let alone the real people who fought and died for the flag. Though some might take umbrage to piloting play soldiers through recreations of some of modern history’s darkest hours, it’s the ability of these games and their powerhouse soundtracks to truly make us feel the honor and adventure of a bigger fight, including the creative one of giving honor and glory, let alone respect, to videogame scoring. Perhaps only Hollywood’s most famous commander could have lit the spark to advance the ranks through a musical saga of film-worthy thrills and patriotism to spare.

Click on Link to purchase: MEDAL OF HONOR soundtrack set