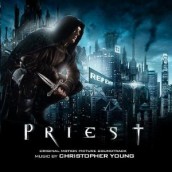 When it comes to the musical battle between heaven and hell, Christopher Young plays the clash of Godly might and the unholy’s fearsome forces like few composers in the supernatural scoring business, especially with the massive symphonic and choral power of such soundtracks as HELLRAISER, BLESS THE CHILD, THE EXORCISM OF EMILY ROSE, DRAG ME TO HELL, GHOST RIDER, etc. Now Young’s religioso voices and snarling orchestras have at it again with terrifically entertaining fury on the future, vampire-plagued Earth of PRIEST.

It’s one thing to unleash the tropes of musical hell, but it’s another to truly know how to kick ass with them, this time with Crucifix Shurikens and superhuman powers of a hero whose arsenal puts the holy hand grenade to shame. It’s Young’s enthusiasm, not to mention old-school thematic talent with a full-on orchestra that really makes his work in the genre rage like a horror acolyte going for broke, unleashing walls of malefic melody, twisted dissonance and a blessed sense that the angels will come out on top- at least most of the time.

Young brings it on here right from the blasting church organs and religioso voices that announce PRIEST’s testosterone ride through the evil badlands. Weird electronic samples signal the movie’s future setting, with triumphant strings and frantic percussion laying darkly heroic waste to the relentless music of the bloodsuckers he encounters. Yet Young is also sure to hear religion’s more beatific side before getting back to the choral and symphonic fighting at hand. Through all the glorious sound and fury, Young brings a real sense of rhythmic development to PRIEST’s lengthy cues that make this soundtrack stand high on his altar of horror action.

Thankfully PRIEST’s score is available in the physical realm as well as the e-ether, something that will hopefully continue to bring converts to Young’s ever-crazier, Dante-worthy quests through the musical underworld.