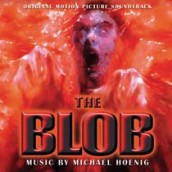 Ahhh, to be back in the synth-driven days of horror scoring, especially covered in red, keyboard goo, voices, dark strings and feverish percussion that accompanies the 1988 BLOB– all placed into an undulating musical mass by Michael Hoenig.

Having played with Tangerine Dream, Hoenig’s first synth credit was gracing GALAXY OF TERROR before establishing his own composing chops on such genre cult favorites as MAX HEADROOM, THE WRAITH, THE GATE and I, MADMAN. While THE BLOB’s music seems to be all effectively shapeless stings dribbling tones, and militarism for the true government bio-villains, Hoenig’s score really kicks into gear during a movie theater onslaught that puts the original’s to shame, creating a rhythmic drive that embodies both the humans’ heroic desperation and a massive sense of relentless doom. It’s the formless being given a taste of thematic purpose, with Hoenig’s suspenseful onslaught leading to a terrifically exciting climax in the town hall.

Easily one of the hardest CD’s to find since the movie’s 1988 release, La La Land now does a great job of presenting Hoenig’s BLOB in all of its chilling glory, with perceptive and fun liner notes by Brian Satterwhite that detail how much musical form there actually is to Hoenig’s “sound sculpting.” This score might be as much of a delightful time capsule as Ralph Carmichael’s original 1958 soundtrack, but Hoenig’s BLOB still packs the kind of gleefully sinister Synclavier punch that I’d happily welcome back to ooze through the projection booth windows, let alone one of the genre’s best, if unsung remakes.